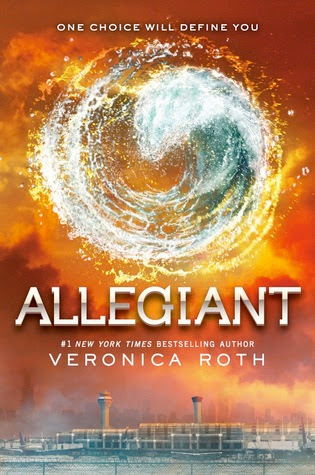 I probably need to say that this review will probably be a jumbled mess. Bear with me please. I don't normally feel the need to state this, but with all of the controversy surrounding this book, I want to make sure you know this review is spoiler free.

I’m sure you all have seen tons of press about Allegiant. This was probably the most anticipated book of the year for most people. It definitely was for me. So I’m sure you saw the Allegiant countdown widgets on everyone’s blogs. I’m sure you saw dozens of Waiting on Wednesday posts about this. There was a mishap with some supplier somewhere and some people got copies super early, which means spoilers were leaked. And then release date finally came. Now normally, I go to my local book store and pick up books that I’m highly anticipating so that I can have them on release day, but the last one I bought was almost half price on Amazon compared to my local book store on release day. (Yeah, yeah, Amazon’s the devil. Well not to me. I heart Amazon.) And so this time I preordered Allegiant through Amazon instead of picking it up on release day. This meant that tons of people got their hands on Allegiant a couple of days before me. Enough time for spoilers to begin amassing, comments to begin piling up, and opinions began to be formed.

And well, I say all of that to say that I was extremely nervous going in to Allegiant. I’m not normally one of those people who dreads reading the last book in a series just in case it doesn’t go the way I want it to. I’m more of the type that dives in head first because I can’t wait to experience it whether good or bad. But all of the hype and comments had me stressed to the max about this book. Let me be clear, I didn’t read any spoilers, but I did read some where others had read spoilers and based off the spoilers decided not to even pick up the book. All of this buzz and conflict had me a bundle of nerves. (Didn’t help that I was already having some anxiety over some real life things as well.)

Ultimately I picked up and finished Allegiant. The beginning was going just fine. I wondered to myself “what are all of these people complaining about?” And then I hit the middle and I started getting frustrated with these characters *clears throat and cuts eyes* (**FOUR!!!!!). I really wanted to pop them him over the head. And I don’t know if it was the negative hype, my personal frustrations with characters making some really dumb decisions especially when those characters are supposed to be smart, or if it was my general anxiety, but during this part of the book, I really just wanted to throw the thing across the room. The ending wasn't the part that frustrated me the most. It was the middle. But nevertheless, I moved passed the frustrating middle business and things got better for me. And then the ending happened. I probably would have been frustrated with it had I not been warned that many people hated it, and therefore I lowered my expectations. But the ending really just wasn’t that big of a deal for me as far as getting angry or upset. It made me sad. I teared up, but I found the ending to be solid and acceptable.

Four and Tris start off Allegiant in a rocky kind of place. She lied to him about several things in Insurgent, and so he’s got some trust issues based off that. But they have a talk about how they both need to do a better job being honest with each other, and so things get better. They find themselves on more stable ground.

“We’re not people who touch each other carelessly; every point of contact between us feels important, a rush of energy and relief.” - Four

“I Feel the urge, familiar now, to wrench myself from my body and speak directly into her mind. It is the same urge, I realize, that makes me want to kiss her every time I see her, because even a sliver of distance between us is infuriating.” - Four

I was as I mentioned above extremely frustrated with Four at one point. He made a decision that was contradictory to a conversation that he and Tris had. Then he semi-rectifies it and talks about it with her. But he doesn’t listen to her. Turns out she was right. I know that’s a sticky place to be—situated between your own judgment and the judgment of someone else that you highly respect and trust. Truthfully I felt like the Four from Allegiant, and even Insurgent really, wasn’t the same person from Divergent. He felt like a completely different person. His mannerism. His speech. His attitude. His decisions. They all felt like they were coming from two different people. Maybe that was supposed to be the difference between him being Four and him being Tobias (I hate that name by the way). But I would think that Tobias would be a more complete person and Four would be just one side of himself—just the Dauntless side. But that wasn’t the case at all. Maybe the Tobias part is the part that carries the baggage from his past which weighs him down and causes him to question and doubt. Whatever the cause, and not just because of the name, but Four is a much more likable and understandable character than Tobias for me.

One of my favorite aspects of Allegiant, and something that I don’t point out in books that I read enough, was the quotable moments that seem more like life lessons. Here are a couple of examples:

“I need to deny them the power to control me. I need to know that I am stronger than they are.” – Four, discussing his fears.

“And as I stare out at the land, I think that this, if nothing else, is compelling evidence for my parents’ God, that our world is so massive that it is completely out of our control, that we cannot possibly be as large as we feel.” – Tris, which makes me think of Romans 1:20 (NKJV) – “For since the creation of the world His invisible attributes are clearly seen, being understood by the things that are made, even His eternal power and Godhead, so that they are without excuse.”

“So how can I hold Tobias’s desperation against him, like I’m better than him, like I’ve never let my own brokenness blind me?” – Tris, forgiveness—something this world could use a little more of.

“I used to think that when people fell in love, they just landed where they landed, and they had no choice in the matter afterward. And maybe that’s true of beginnings, but it’s not true of this, now. I fell in love with him. But I don’t just stay with him by default as if there’s no one else available to me. I stay with him because I choose to, every day that I wake up, every day that we fight or lie to each other or disappoint each other. I choose him over and over again, and he chooses me.” – Tris, love isn’t just about how someone makes me feel, it’s more, it’s deeper, it’s harder than just that. Yet it is utterly simply at the same time.

“I sigh. I may like to run, but I hate climbing stairs.” –Tris, a throwback to the Abnegation days of climbing to the choosing ceremony from the very beginning of Divergent.

“There’s no need to giggle...” – Caleb (you need the context to find this funny)

Ultimately I think that the Divergent series reminds me a lot of The Hunger Games series not just in concept, but in how I felt about both series as a whole. I LOVED the games. And I LOVED the Dauntless initiation process. But I hated the political part of both of these series. I disliked the whole war idea and taking down the corrupt government. While I do really love the idea of how much one person can make a difference, this side of the series—the war and politics—wasn’t what I fell in love with. I wanted more initiation. I wanted more Dauntless. While I love Tris and Four, I think I would have been happier with the series if we’d followed other characters through their initiation process rather than follow Tris and Four through the rise and fall of multiple corrupt governments. Whereas with The Hunger Games series, I loved both The Hunger Games and Catching Fire because both of these had a the games in them, I didn’t really like Mockingjay as much because it focused on the politics. Unfortunately for the Divergent series, Divergent itself was the only book in the series that focused on the initiation process. And therefore, both Insurgent and Allegiant felt lacking to me. I don’t typically read reviews before I write my own, but I broke my own rule in this case and I can’t think of a better way to describe this than she did. Jen from YA Romantics said in her review of Allegiant on Goodreads that Divergent felt more Dauntless and Allegiant felt more Abnegation. That’s the perfect way of describing these two books.

The ending of Allegiant was very Abnegation—true Abnegation. I strongly wish I could discuss this is greater detail with you guys, but I can’t spoil it for anyone who hasn’t read it. I’m surprised I haven’t spoiled anything in this review as it is.

Anyway, I think Allegiant gets 4 Stars. It’s still a well written book. It still sparked emotion within me—even if mostly anxiety. Have you read Allegiant? If so, what did you think? (Please keep comments spoiler free!)

**I refuse to call him "Tobias" except when referring to the differences in his personality.