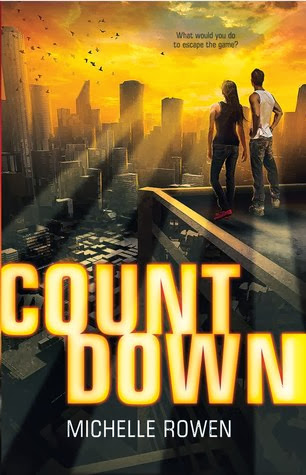 Countdown was originally published under a pseudonym and as an adult novel in 2008. Apparently, it was suggested to Michelle Rowen that it would make a great young adult novel. I couldn't agree more. Having not read the adult version of this story, I can't really give you a comparison, but I can tell you that I most definitely enjoyed this young adult version.

I love the concept of Countdown. These two characters are thrust into this deadly game against their will. In this case, these characters, Kira and Rogan, are playing as a team in the game. And with playing as a team includes these chips placed in their heads. They must stay within 90 feet of each other or risk both of their heads exploded and losing the game. Countdown has a very Hunger Games-ish feel to it, but since it was originally released in 2008, around the same time as The Hunger Games, this isn't a copycat book.

Kira lost her family when an intruder came into her home and shot her mother, father, and sister while Kira hid under her bed. The intruder was coming after Kira too but was scared off by the police. This has left Kira homeless, bitter, angry, and completely terrified of the dark.

Rogan's story is much more of a mystery that's essential to the plot and can't be revealed in too much depth here in order to prevent spoilers. What I can tell you is that Rogan was convicted of murdering 9 girls at a local dorm and sentenced to juvenile detention until he turned 18 when he would be turned over to the worst prison possible. Unlike Kira who had no knowledge of this deadly game, Rogan not only knows about Countdown, but he volunteered to play in an effort to escape his remaining jail sentence.

There were some parts that felt too "easy," but for me this really was a minor issue. I read Countdown in one day, only pausing long enough to let my kindle recharge. And while Countdown ended in a place where I felt at peace with no need for a sequel, I kept thinking throughout the book that "I want more of this." Or "I wish there was a sequel." Maybe that just means I need to grab the adult version.

Countdown gets 3.5 Stars. Have you read Countdown? What did you think? Let me know!