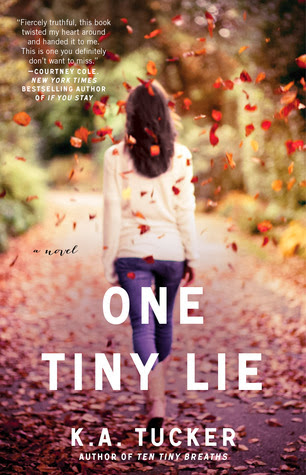 Goodreads description--Livie has always been the stable one of the two Cleary sisters, handling her parents' tragic death and Kacey's self-destructive phase with strength and maturity. But underneath that exterior is a little girl hanging onto the last words her father ever spoke to her. “Make me proud,” he had said. She promised she would...and she’s done her best over the past seven years with every choice, with every word, with every action.

Livie walks into Princeton with a solid plan, and she’s dead set on delivering on it: Rock her classes, set herself up for medical school, and meet a good, respectable guy that she’s going to someday marry. What isn’t part of her plan are Jell-O shots, a lovable, party animal roommate she can’t say ‘no’ to, and Ashton, the gorgeous captain of the men’s rowing team. Definitely him. He’s an arrogant [jerk] who makes Livie’s usually non-existent temper flare and everything she doesn’t want in a guy. Worse, he’s best friends and roommates with Connor, who happens to fits Livie’s criteria perfectly. So why does she keep thinking about Ashton?

As Livie finds herself facing mediocre grades, career aspirations she no longer thinks she can handle, and feelings for Ashton that she shouldn’t have, she’s forced to let go of her last promise to her father and, with it, the only identity that she knows.

I'm horrible about not reading the description of a book before I jump in and start reading it. I do this on purpose. I don't want to know too much information before I start reading because I want my experience of the book to be as authentic as possible. But that causes me to miss sometimes crucial information. In this case, I thought One Tiny Lie was following Kacey's story from Ten Tiny Breaths. So needless to say, I started out a bit confused, though it didn't take long to figure out that One Tiny Lie was about Livie instead of Kacey.

I always found myself relating to Livie while reading Ten Tiny Breaths. Though she doesn't have a huge role in that book, it was obvious that she's the sister who keeps it together while the other one falls apart. I just see myself being the same way. People can fall apart around me, but I have to keep it together. Obviously, that doesn't mean I'm better than them, it just means we respond differently. Livie's way of coping is only slightly more healthy than Kacey's, but it still needs tweaking.

Can I just say that I love Dr. Stayner! If he were a real psychiatrists, I think I'd sign up to do some therapy with him immediately. Great character. But let's get back to Livie.

Livie's made it to Princeton. Her father, who as we know from Ten Tiny Breaths died in a car accident, also went to Princeton. She's got a plan to make her Daddy proud and follow in his footsteps and this path that they dreamed up when she was younger. Straying from that path is not an option, but that's exactly what Dr. Stayner pushes her to do. Try new things. Meet new people. Find out what she really wants out of live. Find herself.

Livie meets Ashton early in the book, and he's everything that she needs to stay away from. Yet he brings out emotion and passion out of her like no one else can. There's one problem...Ashton isn't single. While the very idea of cheating has me running for the hills and most relationships are "complicated," KA Tucker explored this concept in a way that didn't leave me feeling like vomiting. That doesn't mean I approve of some of the behavior between Livie and Ashton. I wanted to smack them both at different points throughout the story.

While there were some aspects I didn't love, the cheating and some cliches with Ashton's character, KA Tucker handled these in such a way that didn't have my rolling my eyes every two seconds or wanting to throw the book across the room. As a matter of fact, I really couldn't put it down. I was supposed to be participating in a paranormal read-a-thon (Fraterfest) when I started and finished One Tiny Lie, but I just had to read this book.

One Tiny Lie easily gets 4 stars from me. Have you read One Tiny Lie? What did you think? Let me know!