I was supposed to do a Top Ten Tuesday post today, but I didn't love the topic (cover trends I like/dislike). Instead, I felt like this would be a good opportunity to do a short review of the Delirium pilot that Hulu is featuring for a month (starting June 20th). 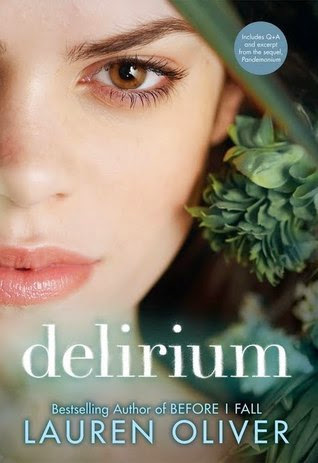 Delirium by Lauren Oliver was one of my favorite reads of 2013. The writing style was so beautiful. Lena, as a character, was so well written. She was passionate, terrified, and often times desperate. All of which made this such an enjoyable read.

Needless to say, when I saw that Hulu was airing the pilot developed for Fox (which Fox chose not to pick up) I was so excited. I think Delirium would be the perfect fit for a TV series instead of a movie. So June 20th, I sat down to check out this pilot and wanted to give you guys a mini review of what I thought.

The pilot was both exciting and disappointing at the same time. It essentially goes through the entire book in one episode. Aspects of Pandemonium (book 2) were even brought into the pilot as well. From what I've seen this pilot was created for Fox as I've already said, and Fox decided not to pick up the series. That being said, I think had Fox decided to pick it up the pilot might have been revamped before airing to the public. At least, I hope that's the case. They could have spent an entire season on book 1 alone.

The pilot and the book had differences of course. Even more than a movie that typically spans about 2 hours, cramming an entire book into 43 minutes will require elements to be cut, multiple characters to get merged into one, and changes to be made all-around, etc. Emma Roberts did a really good job jumping into the character of Lena. With only 43 minutes to see what these actors can do with the characters given, Daren Kagasoff, Jeanine Mason, and the other cast members were great choices.

All of that being said, I'd like Hulu to see that there's much interest in Delirium. My hopes would be that they pick up the series and revamp the pilot. So...while I didn't LOVE this pilot, I can see potential with the actors and such for this to be a really successful TV series.

In case you missed the trailer, here it is...

Have you seen the Delirium pilot? What did you think? Let me know!