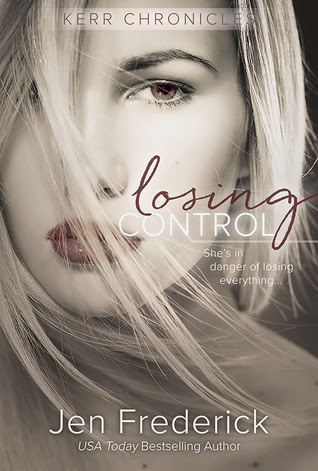 Goodreads description--I’d do anything to keep my mother alive.

Anything, including ask Ian Kerr for help. I don’t know much about him, except that he has more money than some small countries. And he’s willing to spend it on me. Just one catch: there’s a string attached, and not just the one I feel pulling me into his arms and his bed. There’s also the plan for revenge he wants my help with.

Every time he says my name, it makes my body shiver and my heart stutter. I know he’s going to wreck me, know there won’t be anything left of me but lust and sensation by the time he’s done with me, but even though I can see the heartbreak coming towards me like a train, ready to crash into me, I can’t get out of the way. I want what he makes me feel. Want what he’s offering.

This may have started out as something to save my mother, but now…now it’s about what he makes me feel. I’m in danger of losing everything that’s important. Worse? Ian's whispered words and hot caresses are making me believe that's okay.

When the opportunity came up for me to read and review Losing Control, I jumped on it. I’ve read three other books by Jen Frederick earlier this year and enjoyed each one (Undeclared, Unspoken, and Unraveled). So reading Losing Control was a no-brainer for me.

I really enjoyed reading about Victoria. She’s not what I would consider the typical leading female character. She has a learning disability which causes her trouble with reading and writing. Often times authors write about female leading characters who love to read because often times authors themselves love to read, but I loved that Victoria pretty much avoided reading as much as possible. She’s not normally bothered by her struggles or disabilities, but it can be a sore subject. Victoria is still a very smart character. She’s observant and perceptive, not a pushover. Aside from that, Victoria has a close bond with her mother who has just been re-diagnosed with cancer. Because her mother, Sophie, can’t work due to her treatments, Victoria has taken on the financial burden as well as the responsibility of caring for her mother. She’s sacrificed and compromised her moral standard in order to do what pays the bills. Don’t get me wrong, she’s not a prostitute, she just delivers packages that she’s aware are probably illegal. I loved that Victoria was a bike courier. That’s something we don’t have in small towns, but it added authenticity to Victoria’s story.

On one delivery (a legal one), she runs into a handsome man, Ian Kerr. Ian and Victoria do have an insta-lust relationship that Ian later explains might have been insta-love-ish on his part. At least one of those “I knew you were special from the moment I saw you” kind of things. Ian’s a bit of a mystery. Victoria knows that he has dealings with her step-brother, Malcolm, who is also her boss for the illegal deliveries that she does. But yet Ian doesn’t seem like a criminal. She’s hesitant to let her guard down around him. As luck would have it, Ian just so happens to be filthy rich. And he wants to lavish his money upon Victoria. Of course, Victoria doesn’t want any of it, but what kind of man would he be if he didn’t want to share his abundance with her?

Ian’s dealings with Malcolm aren’t illegal exactly, but they are unsavory. Ian struggles with asking Victoria to participate in his plan, but he’s trying any way he can think of to get her to accept financial help from him. I loved seeing his genuine care and concern for Victoria but also for her mother, Sophie.

I do have to say that Losing Control was pretty graphic. It was funny because as I was reading Losing Control the "dirty talk" was cracking me up. There were moments when what was said just wasn’t anything that would have been attractive to me...like at all. It took Ian and Victoria a while to work up to this place in their relationship, but boy once they did…it was "on like Donkey Kong." Like…all the time. Just a fair heads up there.

Losing Control gets 4 stars from me. Likeable, different characters. The plot that was interesting, not entirely original, yet not overdone. I loved that Losing Control didn’t have the characters making stupid decisions at the 70% mark just to create some kind of conflict. As a matter of fact, I really enjoyed the entire last 30% of the book just as much as the beginning. And I’m looking forward to checking out Taking Control, book 2, as soon as I can! Have you read Losing Control? What did you think? Let me know!

Bestselling author Jen Frederick is offering readers a free digital serial romance via her newsletter starting on Tuesday, May 27th. To celebrate the release, Jen is holding a Rafflecopter giveaway for a Kindle Fire e-reader loaded with her entire backlist. The giveaway ends June 7th.