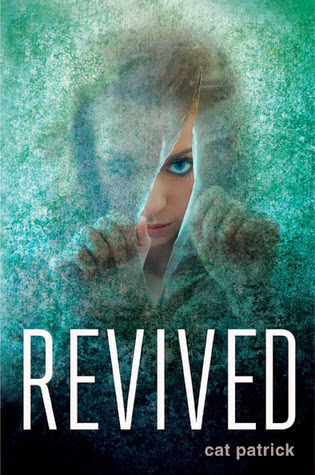 I won Revived as part of a giveaway last year. The giveaway was the option of two “packages.” Each package offered two books. And well, I wanted one of the books and Revived just happened to be the additional book in the package. I’d never heard of it before that, but having read the description I liked the concept. However, since I’d never heard of it before and didn’t know anyone else who’d read it or heard of it, Revived wasn’t making a high priority on my TBR list. It just so happened that I came across the audiobook version in my local library during a time when I needed an audiobook to listen to immediately and most of the ones on my radar had a waiting list. So I picked up Revived.

Revived is one of those books that I feel like the concept was better than the execution. I liked the idea of a drug that can bring people back to life. Revived bordered on the younger spectrum of YA which isn’t my favorite. And so overall the book just left me feeling “meh.”

Daisy, as the description says, has been revived five times. There’s the initial bus crash that landed her in the program to begin with, but then there are been other instances as well. Choking on a grape, being stung by bees—which she’s allergic to. Each time Daisy dies she has to be relocated because the rest of the world can’t know she’s been revived. Everyone from where she was before thinks she died. Daisy relocates with her handlers Mason and Cassie who play the role of her parents even though they’re not. Mason and Daisy have a fairly close relationship. He’s essentially been her father since she was five, but Cassie’s involvement never really made sense to me. She’s described as being a robot and I’m not sure if that’s accurate as in she’s truly a robot or as in she’s emotionally robotic. Cassie’s entire person, background, etc was a bit “muddy.”

Also as the description says, Daisy actually makes some legitimate friends outside of the program in her newest relocation. Audrey quickly becomes her best friend, and Matt slowly becomes her boyfriend. Daisy has to wonder how much of a true friend she can be to both Audrey and Matt when there’s so much about herself that she’s not supposed to share with them. Can you really be close to people you have to lie to? But Matt and Audrey have a secret too. Audrey’s sick and Daisy is in possession of a miracle drug that saves lives. Unfortunately, Revive won’t work on Audrey. Daisy, who has never really been faced with the finality of death since she’s been revived five times has to realize that not everyone gets to come back from the dead.

A peeve of mine concerning Revived was that the members of the revive program call the founder and creator of the program “God.” I get the idea behind that being because he essentially controls who lives and who dies and how everything works. He has everyone in the program’s lives in his hands. But I felt like this was disrespectful. In Revived, “God” isn’t good. His ways are not just. And he can’t be trusted. So to read about this character and give him the name “God” felt all kinds of wrong to me and left a bad taste in my mouth.

Revived was also the first book I’ve read that included a transgender character. That’s all I’ll say about that.

Overall Revived fell a little flat for me. The conflict felt rushed and unrealistic. The backstory of all the characters didn’t feel completely flushed out. It just ended up being an “okay” book. Give me a year or so and I’m not sure how much I’ll even remember about Revived. It wasn’t a “bad” book by any means, but there wasn’t anything overly “good” about it either. Revived gets 2.5 Stars from me. Have you read Revived? What did you think? Let me know!