The Girl Who Kicked the Hornet's Nest - Review 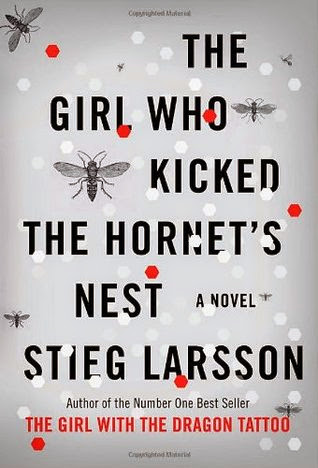 The Girl Who Kicked the Hornet's Nest (Millennium, # 3)

Goodreads description--Lisbeth Salander — the heart of Larsson’s two previous novels — lies in critical condition, a bullet wound to her head, in the intensive care unit of a Swedish city hospital. She’s fighting for her life in more ways than one: if and when she recovers, she’ll be taken back to Stockholm to stand trial for three murders. With the help of her friend, journalist Mikael Blomkvist, she will not only have to prove her innocence, but also identify and denounce those in authority who have allowed the vulnerable, like herself, to suffer abuse and violence. And, on her own, she will plot revenge—against the man who tried to kill her, and the corrupt government institutions that very nearly destroyed her life.

Once upon a time, she was a victim. Now Salander is fighting back.

This entire series has been very different from what I typically read. I normally focus on books that have some kind of love story involved, but I'll settle for any story that makes me feel something. The other main kind of story I enjoy is one where all of the pieces of the puzzle fit together just perfectly. And well, that's the type that the Millennium series fits into. Every single piece is important in some way or other. The Girl Who Kicked the Hornet's Nest picks up immediately where The Girl Who Played with Fire leaves off. The Girl Who Played with Fire ended at a good breaking point, but there were a lot of ends that still needed tying up. The reader is given a sense of satisfaction in knowing who framed Lisbeth and why, but The Girl Who Kicked the Hornet's Nest focuses on the rest of the world finding out who framed her and why. And there are still more pieces of the puzzle to be exposed as well.

I will say that The Girl Who Kicked the Hornet's Nest has had the best opening of the series so far. The previous two books, both had extremely slow beginnings. That wasn't the case here. But overall, The Girl Who Kicked the Hornet's Nest felt quite long. There were some side pieces of the puzzle that felt unnecessary to the overall story arch of the series. These pieces added a cluttered feeling to the book to me--specifically the additional side story surrounding Erika Berger.

One of my favorite things about the Millennium series is how smart these characters are. Lisbeth and Blomkvist are both brilliant, intelligence wise. Lisbeth is a bit socially awkward because of her childhood and her extreme lack of trust in others. And Blomkvist is quite the opposite. Apparently he's a charmer since women seem to fall at his feet on a regular basis. And I loved watching the battle of wits between Salander/Blomkvist vs. "the bad guys" to see just who would ultimately outsmart who and how. It was fun to watch the pieces come together.

I felt like The Girl Who Kicked the Hornet's Nest was a nice series ender. The overall main story arch ended nicely. Everything I was curious about was addressed, but the ending of the book individually left a little something to be desired for me. It wasn't the ending I had hoped for, but at the same time, I wasn't exactly disappointed with it either. I was almost glad it wasn't what I hoped for. Does that make any sense?

All in all, I'm not sure I have much to say about this one. I'm glad that I pushed through and finished this series. I'm glad that I stepped outside my norm. I would recommend the series to others, but I don't find myself raving about it either. I think it was a well put together and thought out series. Yet I'm also glad to be able to mark it off my list and move on.