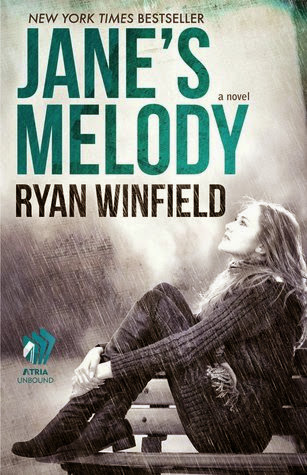 What boundaries would you cross for true love?

That's the question a grieving mother must answer when she takes in a young street musician she believes can shed light on her daughter's death—only to find herself falling for him. A sexy but touching love story that will leave you both tantalized and in tears, Jane's Melody follows a forty-year-old woman on a romantic journey of rediscovery after years of struggling alone.

Sometimes our greatest gifts come from our greatest pain. And now Jane must decide if it's too late for her to start over, or if true love really knows no limits.

I went through a spell a while back when I read several emotionally heavy books in a row, and that caused me to be in a bit of a reading slump. So I turned around and read a couple of lighter books that I could blow through quickly to help me get out of that slump. I’d been eyeballing Jane’s Melody for a while because it sounded like a book that I would enjoy, yet I kept holding off on starting it because it seemed like it might be emotionally heavy with Jane’s daughter Melody having recently passed away.

Now, I’m not a mother yet. And obviously therefore haven’t experienced the love a mother feels toward her child. By default, I haven’t experienced what Jane has, but I do know several mothers who have. Having said that, I expected there to be more intense grief within the pages of Jane’s Melody. Don’t get me wrong, I’m not sure I wanted more grief, but I expected it given the circumstances.

The description tells you that Jane and her young musician have an age difference—about fifteen years. Age differences don’t typically bother me because my husband is twelve years older than me. But Jane kept getting stuck on how much older she was than Caleb. It made her insecure despite how frequently Caleb told her that it didn’t bother him. There was one instance in particular where Jane’s insecurities over her age cause her to behave in a way that had me cringing. I believe I was actually blushing and embarrassed for her. This was the only time the age difference made me feel off balance.

Caleb was a great character to read about. He’s one of the good guys. I found it difficult to reconcile that he was a perfectly decent guy with intellect and skills yet he was homeless when Jane first met him. Sure, being a street musician won’t always pay the bills and there’s something to be said for following your dreams and doing what you love, but then he readily accepts Jane’s plan to offer him a place to stay in return for working around her house. The two sides of him—the before Jane version of Caleb, and the after Jane version—were at times hard to believe.

I was trucking right along with Jane’s Melody, enjoying it—blowing through it really—when I got smacked at the 70ish% mark with stupidity. Jane’s insecurities cause her to do the whole self-sacrifice/self-sabotage thing. She acts like she’s making her decisions for the greater good of their relationship—for Caleb’s good--out of love and all that jazz. When really she’s just hurting them both. The whole thing is stupid. But without said stupidity there would have been no conflict for this book—or at least their relationship—that needed solving. I felt like this being the author’s chosen conflict almost cheapened the book. I mean you’re telling me that the woman who has survived the death of her child can say that she might not survive a breakup. If you wanted to play the angle that Jane felt as if she’d already experienced too much loss then that at least would have been believable. But what actually happened in the book wasn’t that approach and just not exactly believable for me.

I will also say that Jane’s Melody was pretty graphic. I have a lower tolerance for this than some, but Jane and Caleb were at it like every third scene it seemed like. Each encounter wasn’t necessarily graphically detailed, but some were. I would just caution readers who might have a low tolerance for this.

Jane’s Melody ended with one those perfect red little bows tied around everything. Meaning...happily ever after. Everything was clean, neat, tidy, and happy. Now don’t get me wrong, I enjoy a happily-ever-after just as much as the next person, but this one was a little too neat and pretty. I’ve found lately that books in a series where book 1 ends nice and neat with everything resolved doesn’t always lend toward me being excited about the next book in the series. I know more conflict is to come. It has to. The book description for the sequel, Jane’s Harmony, essentially leads the reader to believe that what was wrapped up in the perfect happily ever after ending of Jane’s Melody will need to be reopened and dissected in order to create needed conflict to move this story into the next book. I don’t really enjoy rehashing details I feel have already been handled. This obviously might be a chase of me jumping the gun and making too many assumptions, but all that leaves me feeling reserved about starting Jane’s Harmony any time soon.

Jane’s Melody didn’t take long to hook me. It was an enjoyable read until the climax and major conflict. At that point I began rolling my eyes a bit. Mixed with my graphic tolerance and other minor issues I had leave me giving Jane’s Melody 3.5 Stars. It wasn’t bad. It wasn’t overly good. I can see many people enjoying this book immensely though. Have you read Jane’s Melody? What did you think? Let me know!