The Fault in Our Stars - Movie Review 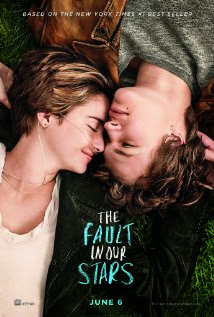 The Fault in Our Stars

I thought it was really weird to cast Shailene Woodley opposite Ansel Elgort due to the fact that they play siblings, Tris and Caleb Prior, in the Divergent movies, but these two make it work. I wasn’t super impressed with Ansel’s performance in Divergent but looking back on it, I think that’s due to the fact that he didn’t really have a huge part (yet). He wasn’t allowed to shine in that movie. And well, shine he did in The Fault in Our Stars. For sure.

This movie was so good that I’m not even sure how much I can say about it. Obviously, I’m all for “run out and see this immediately.” I originally said that I didn’t think I’d want to pay to see this one in the theater twice, but I think Husband and I might have to make a trip to go see it (he wasn’t with me when I saw it the first time).

As I’ve already said, Shailene Woodley and Ansel Elgort both do phenomenonal jobs capturing the characters of Hazel and Augustus. Shailene has the sarcasm and frustration down that Hazel Grace throws out at you. And Ansel did a great job portraying Augustus’s happy, positive attitude despite the circumstances. I loved how he was so determined to live as full and as happy a life as possible. And I think he was exactly what Hazel needed. While Shailene has blown me away in both her emotional portrayal in Divergent and now The Fault in Our Stars--I’m sold on her acting abilities—I do think Ansel still has some work to do with crying on demand. He was obviously into the character, but there was one scene I expected the tears to roll and they just didn’t.

Regardless, I have absolutely zero complaints with this movie. I read The Fault in Our Stars back in early 2013, and I’ve only read it one time through so I’m not cemented in on all the details of the story as I am other series that I’ve read seven and eight times each, but I don’t remember much being different between the book and movie. It followed the events of the book so well. And if there were deviations the movie was so well done that I didn’t notice them because the spirit of the book survived and thrived in a visual format.

The other actors did a wonderful job supporting our main actors—specifically, Laura Dern and Sam Trammell who played Hazel’s parents, Nat Wolff who played Isaiah, and William Dafoe who played Peter Van Houten. I don’t remember a single character or actor that I felt was a bad fit or weighed the movie down.

And of course, take your tissues with you to the theater. There will be crying. I didn’t cry as much in the movie as I did while reading the book. That might be because I knew what to expect. Either way, the movie was still very emotional. My sister and sister-in-law, who went with me to the movie, were both in tears as well.

A fair heads up to anyone who might be considering taking smaller children, there is one f-bomb and then also a scene where sex isn't shown explicitly, but the viewer is aware that it happened. I wouldn't think this would need to be said, but since someone in the theater we went to wasn't aware I'll put this quick PSA out there...babies and toddlers don't make the best movie goers. If your child can't sit down for 2 hours straight without needing to get up and play or suddenly crying, please don't bring them to the theater...no matter which movie you're going to see. Thank you. And you're welcome.