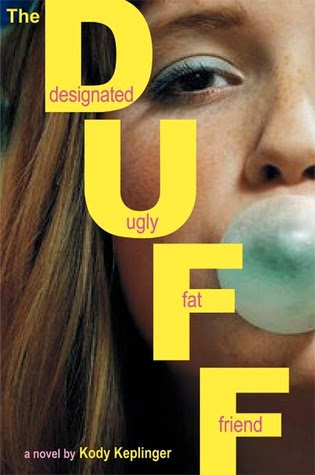 Goodreads description--Seventeen-year-old Bianca Piper is cynical and loyal, and she doesn’t think she’s the prettiest of her friends by a long shot. She’s also way too smart to fall for the charms of man-slut and slimy school hottie Wesley Rush. In fact, Bianca hates him. And when he nicknames her “the Duff,” she throws her Coke in his face.

But things aren’t so great at home right now, and Bianca is desperate for a distraction. She ends up kissing Wesley. Worse, she likes it. Eager for escape, Bianca throws herself into a closeted enemies-with-benefits relationship with him. Until it all goes horribly awry. It turns out Wesley isn’t such a bad listener, and his life is pretty screwed up, too. Suddenly Bianca realizes with absolute horror that she’s falling for the guy she thought she hated more than anyone.

My sister recommended The DUFF to me because she had the audiobook, and she thought I would enjoy it. My sister and I don’t always agree on books, but she was pretty sure that I would like this one. And so when I had some downtime at work I decided to take her up on it to help pass the time. And well overall I did enjoy The DUFF.

The DUFF is one of those books where the characters have a LONG way to go from being likeable in the beginning. Considering that this book is at least inspired in part by Wuthering Heights, it’s understandable that none of the main characters are particularly likeable. I struggled through the beginning, but in the end the character growth and development won me over.

Bianca is our main female character. She’s flawed as all get out. She’s judgmental. She has an awful potty mouth. She jumps to conclusions. She makes assumptions. She’s even hypocritical. She talks and thinks negatively about herself and about others. While I find Bianca, and The DUFF in general, fairly realistic, this isn’t a reality that I really want to be a part of.

Here’s an IM conversation my sister and I had about this book. I’m tried to exclude all of the spoilery parts. I feel like this just gives you the best idea of how I felt about this book (this conversation took place over the two days that it took for me to finish this book):

I battled with The DUFF because I didn't like Bianca very much in the beginning. I feel like there's more to address and I could over analyze a lot of this book, but I was happy to see the character growth in Bianca as well as the other characters. The DUFF gets 4 stars from me. I debated giving it 3.5, but pushed it up to the 4 stars because of how much I wanted to come back to it whenever I would have to press "pause." Have you read The DUFF? What did you think? Let me know!