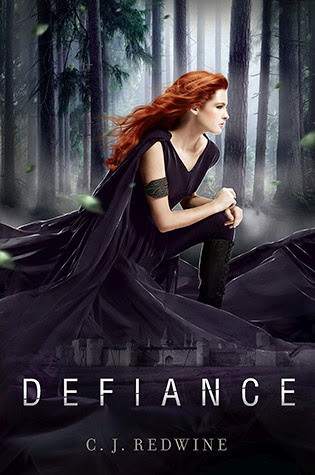 Goodreads description--Defiance by C. J. Redwine is rich postapocalyptic YA fantasy perfect for fans of Graceling and Tamora Pierce.

While the other girls in the walled city-state of Baalboden learn to sew and dance, Rachel Adams learns to track and hunt. While they bend like reeds to the will of their male Protectors, she uses hers for sparring practice.

When Rachel's father fails to return from a courier mission and is declared dead, the city's brutal Commander assigns Rachel a new Protector: her father's apprentice, Logan—the boy she declared her love to and who turned her down two years before. Left with nothing but fierce belief in her father's survival, Rachel decides to escape and find him herself.

As Rachel and Logan battle their way through the Wasteland, stalked by a monster that can't be killed and an army of assassins out for blood, they discover romance, heartbreak, and a truth that will incite a war decades in the making.

I’ll say up front that I’m torn about Defiance.

Defiance is a dual narrative. We have both Rachel and Logan narrating. Rachel is a fiery character. She’s sassy. She’s impulsive. She’s totally not a go-with-the-flow person. Her father taught her about tracking and fighting, and apparently he didn’t spend much time teaching conforming or propriety. Rachel defies what her society sees as proper time and time again in order to do what she feels needs to be done and say what she feels needs to be said. Sometimes she was right, and sometimes she needed to sit down and shut up. As the description says, Rachel’s father doesn’t return from his last courier mission and the Commander pronounces him dead. Rachel is then entrusted to the protection of Logan, her father’s apprentice, not because it was the Commander’s will but because that’s who Rachel’s father wanted. This is especially awkward for Rachel because also like the description says, Rachel declared her love for Logan about two years back and he didn’t reciprocate. Ever since, she’s done everything she can to prove to Logan (and herself) that she no longer feels that way toward him. But even still, she can’t avoid the humiliation of being thrown into his care and protection. From what I gathered, the two main Protector relationships are Husband and Father. So you can see where this would be a bit strained for Rachel.

And then there’s Logan. Logan doesn’t out and out say that he didn’t feel anything for Rachel back when she declared her love for him. Instead what he focuses on is that he’s in a precarious situation with being her father’s apprentice. He can’t afford to mess that up. Logan has no idea who his father is, and his mother was executed by the Commander for being out without her Protector. So…Logan essentially has no one, but Rachel, her father Jared, and a family friend Oliver. Where Rachel is sassy, impertinent, and impulsive, Logan is the complete opposite. He’s rational to the core. He takes his time plotting and planning. And whenever he can, he conforms to the society around him so as to not draw any unwanted attention to himself even when he might disagree with the rules. Logan operates in a “best case/worst case scenario” analysis almost at all times, and I loved this little added detail about him.

I really felt bad for Rachel because she was obviously still hurt from Logan not returning her affection. She’s sad because she misses her father even though she doesn’t believe he’s dead like the Commander declared him. She’s forced to leave her childhood home. And because she can’t sit quietly and act later, she’s drawn the unwanted attention of the Commander himself who is a cruel and evil man. I could understand how she felt, but I couldn’t always support her thoughtless actions. Logan was easy to read. I understood both his actions and his emotions even when he didn’t really understand them himself.

Towards the end of this book, I had an extremely weird reaction. Events were going down that totally got to me emotionally. And honestly, it wasn’t even that the events of the book were that emotional themselves. As a matter of fact, the entire book was a bit hard to connect on an emotional level for me. But something about what was happening in the moment resonated with some things I’d been thinking about recently and the result was uncharacteristic tears in my eyes. I didn’t cry, but I did tear up. Even though I had this reaction, I do not think most people reading this story would have had the same emotional reaction that I did because truly I can’t really explain it myself. It was a very weird experience for me.

I did have some small frustrations with this book. The main one was this: The Commander pulls one of those moves where a loved one of our main character is captured and he uses that loved one to get the main character to do what he wants them to do. The main character of course can’t allow any harm to come to their loved one. When has a villain who is willing to capture and harm or kill someone to motivate another character ever really been someone that you can trust? On the one hand, I HATED that this tactic was even employed as a device of conflict or to move the plot along at all. On the other hand, I was torn with how our main character handled themselves in relation to this situation. I’m being vague because I don’t want to give too much away.

I think fans of world building will struggle with Defiance. We’re not really told too much background on how the world ended up this way or why the society has formed like it has. The description classifies this as post-apocalyptic, but I’m not sure that’s an accurate description. This doesn’t feel like something that could have happened to the real world and the world as present in the book happens to be the result of specific events. It feels like this is a completely different world. It just feels like a fantasy (which I know post-apocalyptic is actually a sub-genre of…but let’s not get into all of that). I personally really enjoy world building, but I never feel like it’s necessary for me to have all of the facts up front. I enjoy getting information in a more organic way over the entire course of the series. I assume we find out more about this world throughout the series so I’m withholding judgment on the world building at this point. And here’s an idea…maybe the character doesn’t even know how the world ended up the way that it has? That’s entirely possible right? But alas, that’s a discussion for another day.

I had some very minor issues with Defiance. There was an aloof emotional feeling for the majority of the book. I hated that the manipulation tactic I discussed above was used as a plot device and point of conflict. And the world building wasn’t as detailed as I know some readers will like, although this didn’t really bother me. I had a weird personal reaction to some events of the latter portion of the book which caused me to tear up, but I don’t think this will be the typical reader’s response. But I liked the main characters (for the most part), and at this point, I am looking forward to continuing this series to see how everything end. Defiance gets 4 Stars from me. Have you read Defiance? What did you think? Let me know!

Posted by Somewhere Only We Know at 7:49 AM