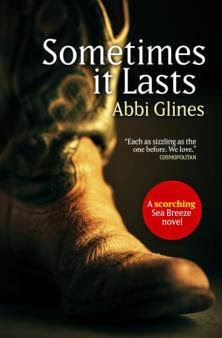 Goodreads description--Cage York has to choose between a love of the game and a love of the girl in this sultry Sea Breeze novel from New York Times bestselling author Abbi Glines.

After waiting for his big break, bad boy Cage York is finally called up to prove his worth in the college baseball arena. But when Cage’s girlfriend, Eva, mourns the sudden loss of her father, it’s not Cage’s comforting arms she runs to, but those of her former fiancé’s twin brother, Jeremy.

Torn between his baseball dream and the girl of his dreams, Cage must prove he’s worthy of Eva’s love, or risk losing her to Jeremy forever.

I think anyone who reads my book reviews knows that I struggle with books that give my characters (yes they are mine) a happy ending and then later stirs the pot of their happily ever after by throwing in a big curve ball that just doesn’t belong (mixing my analogies here…not a good sign for this review). And so yeah, when I first saw that Sometimes It Lasts was going to be another book about Cage and Eva, I can’t say that I was excited. I knew the happily ever after they found in While It Lasts would get disturbed. Yet at the same time, we know that life doesn’t end for these characters at the happily ever after. Real life has highs and lows. Periods of calm and happiness, and periods of conflict and depression. So I’m torn. I really just wanted to read about another Sea Breeze character so we could have ANOTHER character’s happily ever after.

On top of that after reading the description for Sometimes It Lasts, I went into “I can predict the future” mode. I was so sure that I would be able to predict exactly what was going to happen in Sometimes It Lasts. Cage and Eva are faced with time apart because Cage has always dreamed of this baseball scholarship thing. Being able to play ball for a living and move forward in his life from where he started has always been his focus. Eva threatens that. He doesn’t want to leave her behind, but she can’t follow him now. So they’re forced into time apart. Here’s where I made my assumptions. I assumed that Cage would end up drunk one night and would slip in his faithfulness to Eva. While that is somewhat close to what actually happens, I enjoyed that Abbi Glines wrote this conflict in a way that wasn’t completely predictable for me.

That being said, Cage and Eva both make some pretty stupid decisions throughout this book. I was following them up until that point. It’s true that had Eva not released Cage to follow his dream that he would have probably ended up resenting her for that later. But that was about as far as I could follow them. They both let their insecurities and hurts from the past prevent them from fighting for each other and trusting each other.

Ultimately I was fine with the ending. I’m thankful that even though a large portion of this book was predictable, every detail wasn’t as I expected. These books suck me in every time. I find myself getting so annoyed and frustrated while reading them but yet giddy when they find their happy endings. Maybe that’s why I like these books so much. They swing so far in each direction. Are these books literary works of art? No I probably wouldn’t classify them as that. But once I get past my frustrations with circumstance, predictability, and dumb character decisions, I love that these characters always find their way back to each other and to their happy endings.