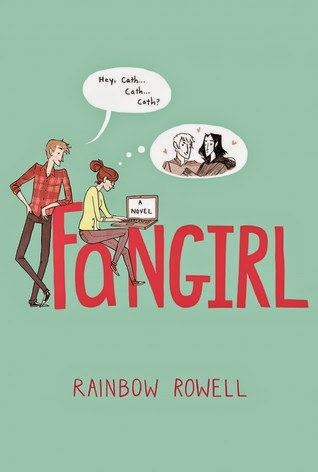 A coming-of-age tale of fan fiction, family and first love.

Cath is a Simon Snow fan.

Okay, the whole world is a Simon Snow fan...

But for Cath, being a fan is her life—and she’s really good at it. She and her twin sister, Wren, ensconced themselves in the Simon Snow series when they were just kids; it’s what got them through their mother leaving.

Reading. Rereading. Hanging out in Simon Snow forums, writing Simon Snow fan fiction, dressing up like the characters for every movie premiere.

Cath’s sister has mostly grown away from fandom, but Cath can’t let go. She doesn’t want to.

Now that they’re going to college, Wren has told Cath she doesn’t want to be roommates. Cath is on her own, completely outside of her comfort zone. She’s got a surly roommate with a charming, always-around boyfriend, a fiction-writing professor who thinks fan fiction is the end of the civilized world, a handsome classmate who only wants to talk about words... And she can’t stop worrying about her dad, who’s loving and fragile and has never really been alone.

For Cath, the question is: Can she do this?

Can she make it without Wren holding her hand? Is she ready to start living her own life? Writing her own stories?

And does she even want to move on if it means leaving Simon Snow behind?

Oh boy. Where to start? This review is going to be a wreck. Please bear with me. So I read listened to Eleanor & Park last year and LOVED it. I was sure that I would want to read anything that Rainbow Rowell writes. And since then she’s published several more books, but for some reason I just haven’t gotten my hands on them. Regardless, Rainbow Rowell has accumulated quite an intense following pretty quickly. People rave about her books. And from what I’ve read so far, they’re not wrong. But high expectations strike again. I went into Fangirl with such high expectations. Fangirl has an average rating of 4.22 on Goodreads as of now. That’s pretty high. Probably one of the highest overall averages I’ve seen for a book that’s been published this length of time. I liked Fangirl. I enjoyed it. But I had some frustrations, some things I downright disliked, and overall I felt disappointed. I still liked it though.

Let me start with my negatives:

"Simon Snow" that is mentioned in the book description is the book series that Cath is such a big fan of and about which she writes her fanfiction. It should be obvious, but I’m going to say it anyway: Simon Snow is loosely based off the Harry Potter franchise. The stories are similar enough to be obvious that Harry Potter is what Rainbow Rowell is mimicking and referencing, but for the Harry Potter fans out there, don’t get caught up in that fact. Simon Snow in Rainbow Rowell’s Fangirl has differences from Harry Potter that will have more literal fans turning up their noses. As a Harry Potter fan and also someone accused of being too literal at times, I appreciate the nod to HP that RR was doing, but I almost wish she hadn’t chosen HP because it forced me to make comparisons. And nothing measures up to HP. Ever. And Cath’s fanfiction version of Simon Snow’s version of Harry Potter was even more difficult for me to swallow. With the two main characters, Simon and Baz, being gay in Cath’s fanfiction, Carry On, Simon, I just couldn’t get behind it. At all. That’s like Harry and Ron. Together. Um…no. OR since Simon and Baz actually started out as enemies, it’s more like Harry and Draco. Together. No no no no! NO! I realize Simon Snow is supposed to be different from Harry Potter. But just….still………….NO!

Aside from the issues I had with Cath’s version of Simon Snow, the inserts of both Cath’s fanfiction and the “actual” Simon Snow excerpts were a struggle for me. I either wanted access to the whole series or none of it. I felt like I was just getting pieces of the puzzle. And I found myself dreading those inserts when they came up. I wanted to skip them, but I was afraid I would miss something important. Truth be told, I have enough faith in Rainbow Rowell to believe that these pieces play a major part into the overall story of Fangirl, but I couldn’t find it in myself to care to try to figure it out. Or really think about it at all.

Since I’ve been discussing Cath’s fanfiction, I will say that while I was annoyed with the excerpts of both Cath’s work and GLT (is that not really close to GLBT and ironic considering the frequency of gay characters—fiction fiction [in Cath’s writing] & just regular fiction [in Rainbow Rowell’s writing]), I don’t think Cath’s reading to Levi would have been as effective had these excerpt not been included. The moments wouldn’t have felt as weighty as they did. And I absolutely adored the fact that Cath reads to Levi.

Speaking of Cath and Levi, maybe I ought to tell you a bit about the characters. Cath and Wren as the description states are twin sisters. Wren has hit a stage where she feels the need to become more of an individual. She doesn’t want to room with Cath when they go to college. She seems to be easily annoyed by Cath and no longer interested in Cath’s writing. Wren decides to try the typical college life of partying and drinking. And she finds herself losing herself quickly, even though she doesn’t see the problem. Cath likes her patterns. She likes the known. She doesn’t like new people, new places, new experiences. I can totally relate to that. She takes a long time to warm up to other people and even longer to like them. Cath’s roommate Reagan is rough around the edges. There’s definitely more underneath the surface of Reagan and I wish we’d gotten to know her a little more. Reagan is also always around Levi. They went to high school together and they’re pretty close still. Levi is a mix of everything. He goes to parties. He drinks and smokes. But none of those things really define him. He loves the outdoors, specifically working on the ranch that he grew up on and is majoring in range management in order to help the ranch to be more efficient. Cath and Wren’s dad is present physically even when he isn’t present mentally. Rainbow Rowell uses words like “manic” to describe Art (their father), and so I wonder if maybe he struggles with bipolar disorder even though this wasn’t specifically stated. He was a mostly laidback parent, but I loved that he really stepped up when it was necessary.

Even the minor characters shine. Cath meets Nick at her fiction-writing class and they team up to create magic together. But Nick and Cath have different ideas of what they’re getting out of their partnership. Cath and Wren’s mother, Laura, left them when they were 8, but has recently tried to come back into their lives. She’s flighty and doesn’t handle the tough situations of parenthood well at all. Wren’s roommate and boyfriend aren’t very present, but are mentioned. Courtney helps lead Wren down the partying path, but Alejandro helps keep Wren from going too far (most of the time). And then there’s Professor Piper. She’s Cath’s fiction-writing teacher and helps Cath along her path to finding herself and her own voice the most out of everyone. I loved how Rainbow Rowell used Professor Piper as a catalyst in this story.

-You can’t take back texts. If you come off all moody and melancholy in a text, it just sits there in your phone, reminding you of what a drag you are.

-“I feel sorry for you, and I’m going to be your friend.” “I don’t want to be your friend,” Cath said as sternly as she could. “I like that we’re not friends.” “Me too,” Reagan said. “I’m sorry you ruined it by being so pathetic.”

-“Oh, hey, Christmas cups. Did you bring me a gingerbread latte?” Cath looked down guiltily at her cup. “I brought you an eggnog latte,” Levi said, holding it out. “And I’ve been keeping it warm in my mouth.”

-“And in return, I won’t flex my best-friend muscles just to remind myself, and Levi, that he loved me first.”

-“You’re extra nice. With everyone. You go out of your way to make everyone feel special.” “Well, what’s wrong with that?” “How is anyone supposed to know that they are special?”

-She had to make him another omelette.

As I said before, I did like Fangirl. It was more of the Rainbow Rowell that I expect. But my expectations were on the side of being too high going into this. And the excerpts of “Simon Snow” and Cath’s fanfiction version of Simon Snow both annoyed me in almost every way. I can see that this book probably goes deeper than my experience of it, but I found that I didn’t want to go exploring further. Fangirl gets 4 Stars from me. That’s my version of being disappointed with this book. Have you read Fangirl? What did you think? Let me know!