No Place to Fall - Review 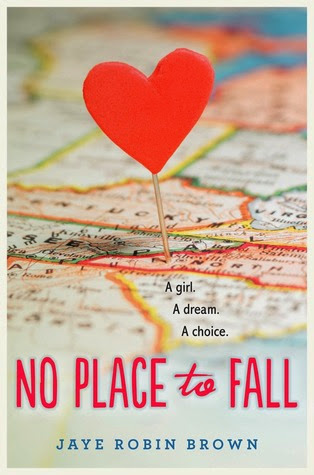 I started No Place to Fall in a bit of a slump. I had just DNF'd Lailah by Nikki Kelly right before starting No Place to Fall and some of my frustrations from the whole DNF process were rubbing off on my experience with No Place to Fall. I went through a period of time at the beginning of No Place to Fall where I worried that I might DNF it as well, but thankfully by the 30% mark I found myself intrigued and interested rather than frustrated and annoyed.

Amber's spent the summer with her best friend, Devon, being a bit wild. Her older sister kind of started her down this path, but her sister, Whitney, has gone too far. Whitney's married to a drug dealer and has been pulled down by Sammy and into his rough life. So Amber has a vision of what she doesn't want her life to turn into. She doesn't want to become Whitney, but at the same time, she doesn't seem to be wholly invested in the lifestyle that her mother has embraced of church and faith either.

Throughout the summer, Amber's begun to expand her singing audience, and eventually, she dares to dream that her voice might be her ticket out of the small town that she grew up in. Devon's brother, Will, is also musically inclined. He plays the banjo, and he helps Amber on her audition to an arts school to which she's recently applied. Amber's always had a small crush on Will, but throughout their increasing encounters, her feelings for him begin to grow.

Truthfully, there is so much going on with No Place to Fall that it's hard to discuss it coherently without just regurgitating the book. Yet, the plot and details didn't feel overwhelming to me while reading it. I never really thought there was too much going on.

At times, I wanted nothing more than to smack Amber in the head and force her to open her eyes and realize that not only does she deserve better, but she can BE better. Yet, when I think about it, I've often wanted to travel back in time to smack my teenage self as well. So this felt right on the money for me. As a matter of fact, there were several pieces of the puzzle to No Place to Fall that fell really close to home for me, and probably contributed to my overall enjoyment.

I must say that Devon's storyline and character wasn't my favorite. Pretty much every other aspect was a great addition to the process. All the little details. And even the writing style was a huge factor in making this book one that I was able to press on and ended up really enjoying.

-I take a shovel and open up my heart and pour in load after load of grief and anger until everything is level and I can plant nice pretty green grass on top.

-The joy I'd been feeling only moments before gets replaced by something else. Something that feels kind of like grief.

-How many other not-so-special-looks have been passed today?

-Something dangerous streaks through my gut.

-This is no place to fall.

-As Pastor Early prays over me, I feel a simple strength enter through my fingers and my toes. All of these folks, the people of my childhood, are praying for my success. Success that means leaving them.

-If C.A. is worried about a boy not liking her, then who else worries? It must not matter what you look like or where you come from.

No Place to Fall was so much more enjoyable than I expected to be. I'm thankful that I pushed through my lingering frustrations from a reading slump and the beginning issues I had with this one. In the end, No Place to Fall gets 4 Stars from me. Have you read No Place to Fall? What did you think? Let me know!