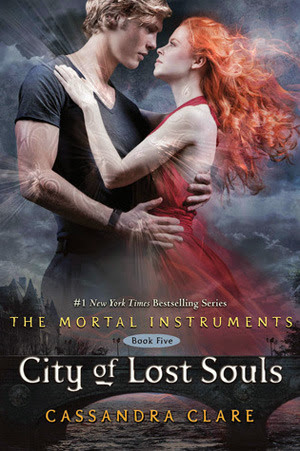 Goodreads description--The New York Times bestselling Mortal Instruments continues—and so do the thrills and danger for Jace, Clary, and Simon.

What price is too high to pay, even for love? When Jace and Clary meet again, Clary is horrified to discover that the demon Lilith’s magic has bound her beloved Jace together with her evil brother Sebastian, and that Jace has become a servant of evil. The Clave is out to destroy Sebastian, but there is no way to harm one boy without destroying the other. As Alec, Magnus, Simon, and Isabelle wheedle and bargain with Seelies, demons, and the merciless Iron Sisters to try to save Jace, Clary plays a dangerous game of her own. The price of losing is not just her own life, but Jace’s soul. She’s willing to do anything for Jace, but can she still trust him? Or is he truly lost?

Love. Blood. Betrayal. Revenge. Darkness threatens to claim the Shadowhunters in the harrowing fifth book of the Mortal Instruments series.

Oh boy! I’m still overflowing with giddiness over this book. I feel like I need to apologize to Cassandra Clare yet AGAIN (for like what? The 5th time or something?)! Sometimes I believe myself able to predict the future (which is totally not possible in case you were wondering). I trust my sense of direction so strongly that I almost believe that what I see lying ahead of me (usually when faced with only partial information) is so set in stone that I forget that other possibilities exist (as often more information exists as well). As much as I think I’d love to be able to predict the future, and as often as my predictions do ring true, I don’t have this ability and my predictions just as often fall short. After reading Clockwork Angel, all I could see were the similarities between The Infernal Devices and The Mortal Instruments. The characters, the plot, the bad guys, the twists, the overall story arc that I perceived, the timing and rhythm of events…it all felt so similar. Then of course I read City of Fallen Angels, and I was just left so distraught after reading it. I was one of those readers that felt closure with the way City of Glass ended. I wasn’t happy that Clary and Jace had just gotten settled and conflict smacks them in the face yet again. I didn’t want them facing these new challenges. I’m one of those readers who typically likes the classic American happy ending. I thought my characters had gotten their happy ending, only for it to be ripped right out from under them. I felt like these characters that I’ve come to love were going to have at least one if not two other books to struggle through adversity with little hope of a happy ending in sight until the end of the upcoming book, City of Heavenly Fire. And while conflict is absolutely essential to any good story—no one wants to read about people who are happy ALL the time—I personally have a hard time going into a book knowing (or assuming) that “happy” isn’t anywhere in sight. Cassandra Clare said to be patient, to trust her, that she loves these characters just as much if not more than the reader does…well I didn’t listen. Summing all of that up, over those two books (Clockwork Angel and City of Fallen Angels), I was just overall disappointed.

And because of that disappointment, I put off reading Clockwork Prince until recently (you can read my review here) and was blown away. As I said in that review, the two series, while similar, really started showing their differences in that book. And I LOVED Clockwork Prince. It was the book that stood out for me as exceptional in a sea of “pretty good” and “okay/average.” (Not every book can be 5 Star worthy.) That being said, while City of Lost Souls doesn’t get the 5 star rating, I’m giving it a solid 4.5.

I was fully prepared, expecting, and assuming for Clary and Jace to not even see each other for the majority of this book. And that was just a depressing outlook to me and a failed prediction on my part. City of Lost Souls did have a semi-slow start for me. I think it was around 70-80ish pages before I was really starting to get excited about it. Up until then I still believed my preconceived ideas would hold true. And because Cassie Clare proved me wrong, I was majorly excited about seeing what else she might prove me wrong about. (As you can see, my being wrong in a prediction is by no means a bad thing in my opinion).

I struggled right along with Clary and the questions she had in her mind about Jace, about Sebastain/Jonathan, about right and wrong. I enjoyed the swapping of narrators. Though sometimes this is annoying to me and I’d rather stick with one main character, it works for this book. And any character is fair game as a possible narrator in this series. I really liked Maia and Jordan. And while I like what’s happening between Simon and Isabelle, I find myself asking what is it about him that she likes? I mean I like him, but why does she? Sometimes I’m not sure that’s explored or flushed out as clearly as I would like. Oh and Sebastain…there in the last 100-150 pages…well…I don’t want to give anything away, but let me just say “Oh my!”. There are more crossovers between The Mortal Instruments series and The Infernal Devices series, which I also really enjoy. And I have a major prediction of my own about a crossover between the series that I can’t share as of now, but if it comes about I will totally say that I called it. I told my husband so that I have a witness.

And one last thing for now, I actually thoroughly enjoy how frequently the characters refer back to their own words to each other or one character remembers words that another character said to them. Because that’s life. We do that all the time. And I absolutely hate when a series isn’t consistent or when a character appears to have forgotten something that I just don’t buy them forgetting. I really enjoy this and it just goes to show how well Cassandra Clare ties everything together and how every sentence has meaning and might be drawn up later. GJ! Faith restored yet again Cassie Clare!

Have you guys read it? What did you think? Looking forward to Clockwork Princess (anyone know when this one is supposed to release?) and City of Heavenly Fire. If you haven’t, this book and this series is a must read! Check it out.