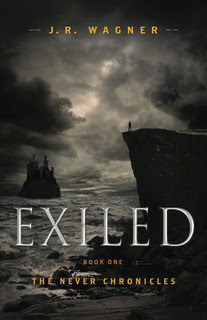 Goodreads Description -- James has never known an ordinary life. As long as he can remember, he and his family have been on the run--moving from place to place, never settling down, never growing roots. Now, just when he's on the brink of manhood, the very thing his family has been trying to prevent tears him from all he has ever known and thrusts him into a place where he is powerless and alone.

Bent on finding a way back, James must brave a place reserved for the worst of his kind. He quickly learns that the land itself poses a greater threat than its inhabitants and if he is to have any chance of returning, he must work with the very people he's been raised to fear.

James has known magic since just after he was born. As a sorcerer, his skills are exceptional yet when he wakes in the Never, his abilities are gone. Armed with nothing but determination and the will to survive, he braves a land wrought with dangers, mysteries and temptations meant to ensnare both body and mind and prevent escape forever.

At most I'd give Exiled 3 stars. The book started out slowly, especially because there really wasn't too much dialogue in the very beginning. I have a hard time getting hooked when there's too much description and not enough interaction between characters. Also, this is another book where we jump around in time and events don't happen chronologically. After I got into the story further, this didn't bother me, but in the beginning I was really confused.

The concept seems like a better idea than it panned out to be. It seems like the author probably has a well drawn out plan for the upcoming events and that everything is already planned out, possibly for the entire series, but with the totatality of what happened in this book (book 1) and where the book ended, I'm not sure it was enough to entice readers to come back for more. At one time in my life, I never thought I'd be able to start a series and not finish it, but with my ever growing TBR list, there's never enough time to read all the books I want to read, and coming back for more after only an "okay" book is not always going to be possible. I've just got to face the fact that there might be some unfinished series in my life. As upsetting as that might be to my OCDness.

Posted by Somewhere Only We Know at 9:06 PM