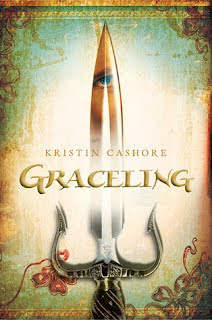 Goodreads description—Katsa has been able to kill a man with her bare hands since she was eight—she’s a Graceling, one of the rare people in her land bore with an extreme skill. As neice of the king, she should be able to live a life of privilege, but Graced as she is with killing, she is forced to work as the king’s thug. When she first meets Prince Po, Graced with combat skills, Katsa has no hint of how her life is about to change. She never expects to learn a new truth about her own Grace—or about a terrible secret that lies hidden far away…a secret that could destroy all seven kingdoms with words alone.

With elegant, evocative prose and a cast of unforgettable characters, debut author Kristin Cashore creates a mesmerizing world, a death-defying adventure, and a heart-racing romance that will consume you, hold you captive, and leave you wanting more.

Let’s see. I’m really not sure where to start. I think there’s something wrong with me sometimes. I find that a lot of times when a book has been talked up to me, I end up disappointed with it. And while I can’t know for sure that the building up is the culprit because you can never go back and unexperience something, sometimes I wonder if I would feel the same disappointment if I had never heard wonderful things about it. I wish there was a way to find out so I could know if I’m truly screwed up in the head or something. *sigh* Oh well (I’m probably just weird in the head, best to acknowledge it).

Graceling was a good book. Better than a good portion of the ones I’ve read lately, but it still doesn’t hit my 5 star rating. (Perhaps I’m too critical. I don’t know.) And honestly, the only real thing I can say negatively about it is that I wish there was more of it. So how can that be bad, right? But yet it can be. I’m giving it a good 4.5 stars.

Katsa is a really good female lead. She’s strong. She’s independent—perhaps to a fault. She’s not quite at Rose Hathaway level to me though. But the thing is, Katsa’s Grace gives her a slight advantage and natural tendency to both of these traits that someone without her Grace would have to work extra hard to accomplish. And while I really do like the idea of the Graces and how unlimited the directions are that can be taken with this idea, I found Katsa’s particular Grace to be somewhat convenient—especially when she finds out more about her Grace. I guess I'm more of a fan of the underdog and Katsa's Grace gives her an advantage over the norm.

Another thing I found to be convenient was the resolution of the conflict with Leck. It just all seemed too easy and too quickly wrapped up with a nice little bow. Of course, I haven’t read the other books in the series, so who knows if that might come back around. I wouldn’t think that it would except for the prologue for Fire was included at the back of my paperback copy of Graceling, and the prologue was the story of Leck’s childhood. So that left me wondering what the point would be of including that in the prologue of the next book if it doesn’t come back around. Obviously it was included for some reason or other, and I hope to find out why whenever I can get my hands on book 2.

I really enjoyed the relationship build up with Katsa and Po and I liked how they completely complement each other. However, this is where I consider Katsa’s independence to be a fault. I just personally have a hard time relating to someone who is so opposed to marriage. And while I understand that once she frees herself from Randa’s control she feels the urgency of remaining in control even more so than before. But couldn’t it be said that to allow the events of the past that have made her feel out of control to hinder her from marriage is truly to allow those events to remain in control of her life? Whereas going ahead with marriage and submission would be ultimately taking control—particularly because she knows Po would never try to control her? The thing is, I can see her point of view. I just don’t agree with it. (Please don’t mistake me and think that I believe every book or love story should end with the pretty bow tying everything up with matrimony. I just struggle with Katsa being so opposed to the idea. Especially because...um...well it's Po!)

I also think it’s truly ironic that the two things she thought she’d never want or need is exactly what she ended up with. She never wanted to be in love and never wanted to be a mother. While it’s true that at the conclusion of this book she was not actually married or a mother, she fell in love and she had to take a child into her sole care and responsibility (for a time anyway) and make sure that child survived and she did it voluntarily and quite well if you ask me. Her motherly instincts definitely came through at multiple points in the story.

Summing it up…Katsa was a strong, gifted character that ended up with exactly what she thought she didn’t want. I enjoyed the love story as per usual. However, the ending left me wanting more, and I’m not sure I can quantify that as the good kind of wanting. I am excited to read Fire whenever I can get my hands on it, but for now I must be satisfied and move on. What do you guys think? Have any of you read Graceling? I’d definitely recommend it.

Posted by Somewhere Only We Know at 8:18 PM