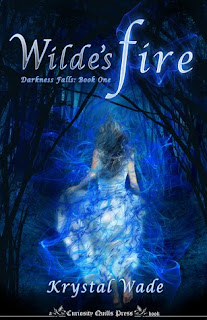 Published By: May 13th 2012 by Curiosity Quills Press

Goodreads Description—“There is no pain in this death, only peace, knowing I am going to die with the one I love the most.” –Katriona Wilde.

Katriona Wilde has never wondered what it would feel like to have everything she’s ever known and loved ripped away, but she is about to find out. When she inadvertently leads her sister and best friend through a portal into a world she’s dreamed of for six years, she finds herself faced with more than just the frightening creatures in front of her. Kate’s forced to accept a new truth: her entire life has been a lie, and those closest to her have betrayed her. What’s worse, she has no control over her new future, and it’s full of magic and horror from which nightmares are made. Will Kate discover and learn to control who she really is in time to save the ones she loves, or will all be lost?

I’m going with maybe 3 stars for Wilde’s Fire. Another average book, which is okay. I think when I read a book I find worthy of a 5 star rating I become more critical of the books that follow. The longer I go in between 5 star books, the more lax and soft I become in my ratings. It wasn’t that there was anything particularly, overly bad about this book. It was just another average book. And since I’ve read several books that I would consider well above average, exceptional, and one even 5 star worthy, lately I just find myself being a bit indifferent to this one.

I kept forgetting that Kate was 20 years old. She seemed no more mature than most of the 16-18 year-olds you might read about in typical YA fiction. Her younger sister Brit seemed almost more mature, experienced, and perceptive than Kate herself. That’s not to say that’s not possible, but it was just kind of frustrating. I’ve said it before, but I don’t mind saying it again. I tend to prefer my YA to lean a little more adult and a little less young. I don’t mind characters that are young in age, but I do struggle with immaturity.

Another thing is the alternate dimensions aspect (actually referred to as “worlds” rather than “dimensions” but you get the drift). I haven’t found many (currently I’m unable to think of any) books that carry out this aspect in a way that makes sense to me. I’m not a science nerd by any means so it’s not that the science doesn’t make enough sense for me because I don’t care about that. But I am a logical nerd and I guess I get mixed up with alternate universes/worlds/dimensions/etc. From A Wrinkle in Time, to The Vampire Diaries: The Return: Shadow Souls to the House of Night series to well…whatever (I’m sure there are more examples, I’m just drawing a blank). I just really don’t like this concept, and any book I’ve ever read that included this has felt lacking to me. Everyone has their points of issue—this happens to be one of mine. So sue me.

Other than that, I’m not finding that there’s too much to report. Wilde’s Fire...3 Stars...check it out and let me know what you think of it.

Posted by Somewhere Only We Know at 7:08 PM