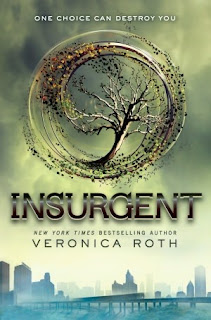 Goodreads Description—One choice can transform you—or it can destroy you. But every choice has consequences, and as unrest surges in the factions all around her, Tris Prior must continue trying to save those she loves—and herself—while grappling with haunting questions of grief and forgiveness, identity and loyalty, politics and love.

Tris’s initiation day should have been marked by celebration and victory with her chosen faction; instead, the day ended with unspeakable horrors. War now looms as conflict between the factions and their ideologies grows. And in times of war, sides must be chosen, secrets will emerge, and choices will become even more irrevocable—and even more powerful. Transformed by her own decisions but also haunting grief and guilt, radical new discoveries, and shifting relationships, Tris must fully embrace her Divergence, even if she does not know what she may lose by doing so.

I really enjoyed Divergent and was ready to jump right into Insurgent since I had it on hand. But man do I wish I had given myself some downtime first. This marks a very rare occasion, one that has never occurred before. I literally wish I had been able to have the gap between releases in order to re-cooperate. I don’t think I understood how drained I was after reading Divergent until I moved into this one. Insurgent literally picks up at the exact moment that Divergent ends. And while that was really cool (not many stories do that), I found myself more than anything quite exhausted throughout the entire reading of Insurgent. These poor characters move from one horrible experience to another horrible experience. And just as the characters themselves had literally nil downtime, the reader has nil downtime. Even though I was exhausted, I felt this need to push through the exhaustion and continue moving through the story, much like the characters themselves had to do. My friend, Lacy, told me that she would compare Divergent to The Hunger Games, and while I didn’t agree with her during my own reading of Divergent, I completely agree now. The Hunger Games kept me pressing forward out of this intense fear that something was going to happen at any minute to these characters that I love, but it was mostly the fear that drives you forward. With the exception of the actual Games and the war, there are moments of downtime in that series. You know bad things are ultimately coming, yet you have a slight reprieve for the moment. That was not the case in Insurgent. There is a fear that drives you as the reader forward, but it’s not a fear of bad things happening—because that is a guarantee—it’s more like a fear of the outcome because bad things are happening constantly.

All of that being said, I’m afraid I might have given the impression that I didn’t enjoy it. That’s not the case at all. I was hooked. I was rooting for the characters. And I like the direction this series is headed in. Veronica Roth’s writing is gripping, and her story telling is better than most. Some moments I find to be quite beautiful. I, also, applaud her ability to tell her story without the addition of unnecessary language. That might seem like such a small thing, but I will never forget the idea of not being smart enough to come up with other words, and I apply that to this medium as well. Her story lacked nothing as a result.

Tris was more of a struggle to like in this book for me than in Divergent. As the reader, I was frustrated when Tris went into her moments of guilt and her inability to forgive herself. I can understand the character's need to experience those feelings and reactions, and the story would be less believable had she not. But I was yelling at her (in my head of course) to get over it, to move on, to wake up, to look around her and see what she’s risking by wallowing. And for goodness sakes, no more running off all the time—and I don’t mean off to danger to save the day, I literally mean the escape mechanism she uses. Dealing with this was an essential part of the story and necessary for Tris’s development as well as the furtherance of her relationship with Four (I’m probably always going to call him that, because Tobias is just…well…not my favorite name in the world). That being said, just as most real-life growing experiences aren’t usually pleasant to experience, they’re not always any more fun to read about either. In my personal opinion, it was all worth it to hear Four’s comment to her at the end.

I think that’s it for Insurgent. 4.5 stars. I’m looking forward to the release of the final book in the trilogy, though I am thankful that I have some time before it comes out, because I need some rest. *Wipes sweat off forehead* What did you guys think about Insurgent? If you haven’t read it, it’s a must read, and I have a feeling it’s one of those special series.

Posted by Somewhere Only We Know at 6:16 PM