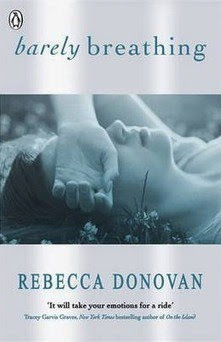 *sigh* Oh boy. What to say about Barely Breathing? Book 1, Reason to Breathe has (at the time of writing this review) been the only book I’ve given 5 Stars to this year. I fell in love with that book, with the characters, and with Rebecca Donovan. But the problem with a series….is well…there has to be more conflict to come, right? Maybe this is a phase, but I’ve come to realize that with characters I really care about, if book one in a series ends on a happy note then I almost dread reading the other books in the series (assuming those books carry on from the same perspective). And that’s because I know more bad things are coming for characters I love. And that’s exactly how I felt with Barely Breathing.

Poor Emma went through so much in Reason to Breathe that it was hard to imagine things getting worse for her. And while they might not have been “worse” exactly, things still weren’t good. Emma’s now living with her mother who still apparently has a problem with sobriety. Emma’s mother starts dating a significantly younger man (who is actually younger than she even knows), but he and Emma begin to connect with each other over their similar, troubled pasts. Throughout the majority of this book, I was yelling at Emma for her horrible decision making skills—especially over things I thought she had learned her lesson about from book 1.

Evan was one of my absolutely favorite things about Reason to Breathe and that remained true for Barely Breathing as well. Unfortunately, he’s not as present in Barely Breathing as I would like which led to my overall disappointment in the book. Evan is such a great guy and I loved how loyal he was to Emma through everything that she’s been through—even when she’s the one causing her own problems. I kept wondering if he was going to reach his breaking point, but he kept proving his worth over and over.

Sara is the same way. I think I said this in my review of Reason to Breathe, but Sara is my absolutely favorite book best friend EVER. She always has Emma’s back. She might not like the choices Emma makes, and she is only human after all, but I would love having Sara in my corner. And while I worry about how present she will be in book 3, Out of Breath, I’m excited for the choices she’s making for herself.

I spent the majority of this book extremely upset with Emma as I mentioned above. I wanted her to do so much better by everyone around her. She redeemed herself a good bit close to the ending, but I worry about it being too little too late. The very ending wasn’t exactly satisfying to me either, but I hope that I will enjoy Out of Breath much more than I enjoyed Barely Breathing. I’m struggling with deciding how to rate this book. Even though I was banging my head against the wall most of the time, Rebecca Donovan pulled a lot of emotion out of me. Granted most of that wasn’t things I wanted to be feeling.

In the end, Barely Breathing gets 4 Stars from me. Overall, it wasn’t what I wanted for characters that I’ve come to love, but I’m looking forward to seeing how everything wraps up in Out of Breath whenever I can get my hands on it. Have you read Barely Breathing? What did you think? Let me know!