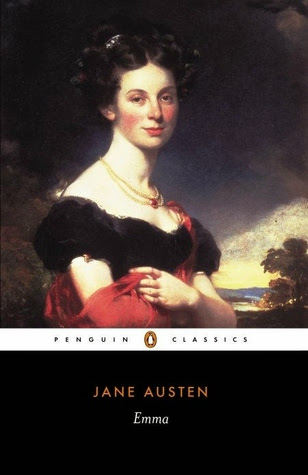 Goodreads description--'I never have been in love; it is not my way, or my nature; and I do not think I ever shall.'

Beautiful, clever, rich - and single - Emma Woodhouse is perfectly content with her life and sees no need for either love or marriage. Nothing, however, delights her more than interfering in the romantic lives of others. But when she ignores the warnings of her good friend Mr Knightley and attempts to arrange a suitable match for her protegee Harriet Smith, her carefully laid plans soon unravel and have consequences that she never expected. With its imperfect but charming heroine and its witty and subtle exploration of relationships, Emma is often seen as Jane Austen's most flawless work.

It’s always been a goal of mine to work through all of Jane Austen’s published works. I can now say that I’ve read the majority of them. Emma makes for the 4th of Jane Austen’s books that I’ve read (Pride and Prejudice, Persuasion, Northanger Abbey, and now Emma). A friend recommended Emma to me as her favorite Jane Austen book several years ago, and so I’ve been excited to read it ever since. While I do try to read a few classics every year, sometimes I put them off because they often take more thought than modern literature. The period language has been a deterrent for me in the past, but I think I’ve read enough Jane Austen at this point that it doesn’t take me as long as it once did.

I can’t say that Emma has surpassed Pride and Prejudice or even Persuasion in my heart as my favorite Jane Austen book. Pride and Prejudice was the first Jane Austen that I’ve ever read and it will always hold that special place in my heart as first and favorite. Persuasion holds the second place because it was one of first gifts my husband ever gave to me as well as the beautiful language that Jane Austen uses as Captain Wentworth lays his feelings before Anne. That scene is one of the most passionate scenes that I’ve seen Jane Austen write. However, at this point Emma does feel like the most complex piece by Jane Austen—at least of her works that I’ve read so far.

Emma Woodhouse, as the description says, enjoys match-making. And the majority of the book is revolved around Emma’s attempts to find the perfect match for her friend Harriet. Emma has taken Harriet under her wing, yet unfortunately Harriet doesn’t have the same social standing as Emma. While Emma attempts to find a match for Harriet, the difficulty she finds is that the matches she seeks to make for Harriet far outreach Harriet’s actual station in life. While Emma is aware that some of her schemes are a bit of a stretch, she’s a bit blinded by her friendship with Harriet to see the forest for the trees. I said before that Emma is the most complex of Jane Austen’s works that I’ve read so far because Ms. Austen weaves so many threads into the background and main story at the same time. All of the characters have their own agendas and not all of them are as upfront as the others.

Emma is well-meaning in her attempts to matchmake for Harriet, but she is flawed as well. Her actions and thinking is often checked by her longtime friend, Mr. Knightly. He is intimately connected with Emma’s family because his brother, John, is married to Emma’s sister, Isabella. I loved Mr. Knightly. He pulls no punches. He tells Emma exactly like it is. He doesn’t hold the truth back from her to protect her feelings. He often reprimands her also. But I loved this about him. Mr. Knightly wanted to improve Emma, but often times, he really just thought she was above her own behavior. I love when a character makes another character want to grow and to be better. Emma doesn’t realize how important Mr. Knightly’s opinion was to her for a long time. Watching their relationship grow and change over the course of the book was really enjoyable.

The other characters, Harriet, Frank Churchill, Mrs. Weston, Jane Fairfax, Ms. Bates, were all really fleshed out. Harriet comes into her own throughout the book. From the beginning she is so influenced by Emma’s thoughts and ideas that she hardly seems capable of thinking for herself. Over the course of the book, Harriet learns to separate herself from Emma and forges her own path. Mrs. Weston is everything that a best friend should be to Emma. Frank Churchill and Jane Fairfax have one of those storylines that make me want to re-read this book since I now know how it ends so I can watch what Jane Austen does with each of their characters in the background more closely. And Ms. Bates…well Jane Austen can’t have a book without having a completely ridiculous character somewhere within her pages.

I love that Jane Austen so openly makes fun of other people with her characters. Every single book I’ve read by her has had some character that doesn’t know when to stop talking, that seems oblivious to the cues of the social culture at the time, and is usually just a generally annoying character. I think she must have been making fun of people that she either knew personally or just the ridiculous way that some people behave. I love this about her writing.

While I enjoyed that this book has multiple love stories within, Emma definitely wasn’t as romantic in speech or dialogue as Pride and Prejudice or Persuasion. Yet, I found myself moving at such an easy pace with this book. Both Pride and Prejudice and Persuasion had a couple of lulls—parts that were much slower than others. Emma didn’t feel that way to me at all. I’m sure that I haven’t added anything particularly interesting to the hundreds thousands of reviews (papers, etc) that have been written on Emma or Jane Austen, but I did want to share what I thought and felt about this one.

Emma gets 4 stars from me. Have you read Emma? What did you think? Let me know!