Nova and Quinton: No Regrets - Review 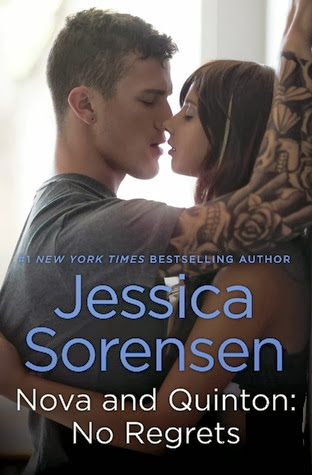 Note: The above link to Amazon is an affiliate link. Affiliate links support giveaways for Somewhere Only We Know readers.

Goodreads description--Today is the first day of Quinton Carter's new life. The toxic guilt of his past left him in pieces-but one girl unexpectedly put him back together. Thanks to Nova Reed, Quinton can finally see the world with clear eyes. She's the reason his heart is still kicking behind the jagged scar on his chest. And he would love to have her in his arms every minute of the day . . . but he's not ready yet.

Playing drums in a band and living with her best friends are just some of the highlights of Nova's life. But the best new development? Talking to Quinton on the phone each night. She wishes she could touch him, kiss him, though she knows he needs time to heal. Yet shocking news is on the way-a reminder of life's dark side-and Nova will need Quinton like he once needed her. Is he strong enough to take the final leap out of his broken past . . . and into Nova's heart?

You guys! Finally a lighter book in this series. I mean don’t get me wrong Nova and Quinton: No Regrets isn’t quite a happy-go-lucky book, but it’s definitely so much more hopeful than Breaking Nova or Saving Quitnon. Man those two books were draining. I was hesitant to read Nova and Quinton: No Regrets initially just because I still felt like I was recovering from Saving Quinton, but my SNL read it before I did and said it was much lighter. So I went ahead and picked it up. And I have to say that it took me no time to read it. I was plugging along and would look at my progress and notice I’d read 30% here and another 30% there. Took less than 24 hours to finish.

Like the previous two books, Nova and Quinton: No Regrets alternates narration between Nova and Quinton. Nova and Quinton: No Regrets is about what happens after leaving rehab. It’s about a boy’s struggle to stay sober. To finding meaning in his life again. To let go of the past that was drowning him. To stop punishing himself. It's about a girl who tries so hard to help people. She wants to save everyone. And she takes on a personal responsibility for what happens with everyone around her. Every life she touches, she’s acutely aware of her impact on that life.

Quinton isn’t sure how much of Nova he can handle in his life, but he knows that she was the one person who wouldn’t give up on him. He can’t just let her go. He knows they have a connection, but he doesn’t know if he can act on that connection. He knows that he has to get his life together alone before he has anything to offer Nova. On the other hand, Nova has gotten her life together, but she still struggles with life’s tough breaks. She knows that she wants a relationship with Quinton, but she can’t pressure him. While long distance relationships are often killed by the distance, the physical distance between Nova and Quinton brings healing to both of them. They have to be separate entities before they can become a unit. They both have more growth to do alone before being together will work.

The secondary characters weren’t as present as they could have been considering Nova and Quinton aren’t actually physically together for the majority of the book. Tristan does have a fairly present role though, and I enjoyed getting to know him better—so much that I preordered his short story, Tristan: Finding Hope. And while I was at it, I went ahead and got Delilah: The Making of Red which I’m afraid will be just as heavy, if not more so, than Breaking Nova and Saving Quinton.