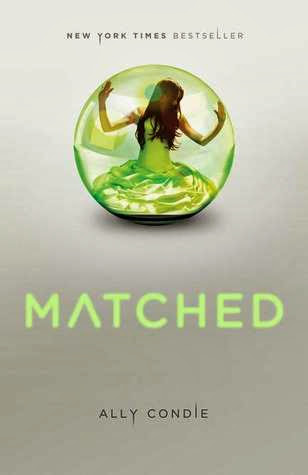 Source: Borrowed from the Public Library

Goodreads description--Cassia has always trusted the Society to make the right choices for her: what to read, what to watch, what to believe. So when Xander's face appears on-screen at her Matching ceremony, Cassia knows with complete certainty that he is her ideal mate... until she sees Ky Markham's face flash for an instant before the screen fades to black.

The Society tells her it's a glitch, a rare malfunction, and that she should focus on the happy life she's destined to lead with Xander. But Cassia can't stop thinking about Ky, and as they slowly fall in love, Cassia begins to doubt the Society's infallibility and is faced with an impossible choice: between Xander and Ky, between the only life she's known and a path that no one else has dared to follow.

You guys Matched is so similar to Delirium by Lauren Oliver. They both have societies who have deemed what is acceptable and what is off limits, limiting books, music, and just about every other aspect of the citizens’ lives. There are Officials (Regulators in Delirium). And at a specific age each citizen is Matched (cured and then matched in Delirium) to another citizen. In Delirium, love is a disease that must be eradicated. In Matched, love is allowed, but who you love is forced upon you—essentially free-will is eradicated. In both books our protagonist falls in love with a boy that she is not "meant" to be with, and then she must decide if love is worth fighting for or if surrendering to the society is what’s best for everyone. Between these two books, Delirium is my favorite, both in story and in prose. Lauren Oliver has just a little extra something in her writing style, and Lena has a little bit more to lose in striving to escape the cure from the “disease” amor deliria nervosa and losing her ability to love at all. However, Matched and Delirium were just different enough for me to enjoy them both.

Where Delirium fascinated me with the concept of love being considered a disease, Matched fascinated me with its society entirely dependent upon statistics. The future is almost predictable based on figures and stats, even what we know to be the most unpredictable—the human element.

The description tells you that Cassia and Ky fall in love, so that’s not a spoiler, but I will say that there was something about Cassia’s relationship with Ky that I wasn’t buying. While I did feel a connection between the two of them, I wasn’t convinced they’d made it to the love stage yet. I can’t quite put my finger on what it is that holds me back, but it just feels too soon. They share a connection, they share secrets, they would fight for each other, but I don’t feel the intensity that I wanted to in order to be convinced. For a book that’s about defying an entire society and culture in order to be with your true love, the whole true love concept better be well done, and this felt lacking to me.

Probably the best thing Matched had going for it was Ally Condie’s writing style. My favorite quotes*:

What is it about your voice that makes me want to hear you speak?

It settles on a point, but I still spin, wondering where to go. - Reference to a compass.

Everything I dream of is simple and plain and every day.

My heart will always fly his name.

Do not go gentle into that good night…Rage, rage against the dying of the light. (Dylan Thomas)

Because the language was the best thing going for Matched in my opinion, I’ve got to give props to Kate Simses who narrated the audiobook version that I listened to from the library. She’s one of the better narrators I’ve ever listened to. Ironically enough, also very similar to Sarah Drew who narrated Delirium. She was easy to listen to without spacing out (meaning she wasn’t monotone). The inflection and emphasis in her voice was used at just the right moments. She was intense when she needed to be, and quiet and somber when appropriate as well.

Matched gets 4 Stars for being well written even if all aspects weren’t as well done as other books I've experienced. Have you read Matched? What did you think? Let me know!