Upon Further Review: The Hunger Games 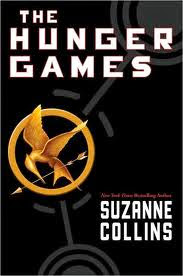 In a dark vision of the near future, a terrifying reality TV show is taking place. Twelve boys and twelve girls are forced to appear in a live event called the Hunger Games. There is only one rule: kill or be killed.

When sixteen-year-old Katniss Everdeen steps forward to take her sister's place in the games, she sees it as a death sentence. But Katniss has been close to death before. For her, survival is second nature.

In my first review of The Hunger Games, I focused mostly on how the plot twists didn’t surprise me because my friends warned me ahead of time not to get attached to any characters and how basic humanity remains the same despite the world that we live in (or fictional world we read about). I still find both of those things to be true. Obviously there were still no surprises for me this time because this was a re-read, but the basic human emotions still go deep. I didn’t feel as much of what Katniss was feeling in this read through, but that could have been because I was actually listening to the audiobook. The narrator, Carolyn McCormick, did an okay job. I wasn’t overly impressed with her narration though. I will say that I find reviewing The Hunger Games to be a bit difficult. It’s such a well-known and loved book, but also because the sequence of events and how when we get Katniss and Peeta’s backstory is just as important as what happened in their backstory.

The Hunger Games starts out pretty somber. It’s the Reaping Day which the Capital wants everyone to celebrate as a holiday, yet each district is forced to send two kids to participate in the Games and fight to the death. Katniss is entered multiple times, Gale is entered a total of 42 times, and Katniss’ younger sister Prim is only entered once. The odds of Prim getting pulled are so low, but as we learn, the odds are never really in their favor. Prim’s name gets called and Katniss doesn’t hesitate to volunteer to take Prim’s place. Since their father died when Katniss was eleven, she’s taken on the major role of providing for her family and keeping her mother and sister safe and fed. It’s a huge burden and responsibility to place on an eleven year old girl’s shoulders, but as we humans often do, Katniss did what she had to in order to survive and to keep her family alive. Peeta has lived a very different life from Katniss. Because he’s the son of the baker, he’s never really gone without food. And Katniss is nervous when Peeta gets picked as the male tribute for District 12 because she feels like she already owes him her life. How can she kill someone who once saved her?

As you can imagine, going into this whole process knowing what’s being required of you—to kill other people or be killed yourself—has to be taxing on any and every emotion you have. From the disgust of the Capital’s extravagance when just about everyone in Katniss’ district is starving, to being asked to kill other people. The emotions are off the roof and all over the place. From the moment Katniss volunteers as tribute she has to begin the portrayal of a strong tribute. She can’t allow herself to cry because even the Reaping is televised. And this literal “game face” is essential to her survival throughout this entire book.

I also mentioned in my original review how any time I start a new book I’m keeping a lookout for the love interest. I make note of phrases like, “There’s never being anything romantic between X and me,” “Maybe there’s nothing romantic between us, but when he opens his arms, I don’t hesitate to go into them,” and “Oh no! Not him!” And so if there’s a love triangle I normally try to base which character I’m rooting for off these kinds of statements and pick the one I think the main character feels the most for. In my first reading of The Hunger Games, I felt very adamant about my choice. And while I still agree with my choice, with this second reading, I definitely felt Katniss’ confusion more.

Katniss has no clue where Peeta stands and what his thought process is throughout the entire book. Even when Peeta is being utterly honest with Katniss, she’s so paranoid of being tricked that she doesn’t believe him. From Peeta crying during his goodbyes, to knowing their history and how Peeta saved her life that one day with the bread, to his strategy to train together and then alone, and even his interview with Caesar…Peeta is constantly keeping Katniss on her toes and she never knows what to think about him. She can’t see the real motivation behind Peeta’s actions. Even when it’s spelled out for her and no matter how many times Peeta saves her life, Katniss thinks it’s all an act. All she knows is that she owes him a debt that she can’t quite figure out how to repay.

Peeta himself is one of my favorite characters. He’s constantly from the beginning working out how he can ensure that Katniss leaves the arena alive. I don’t know if it’s because of the way he feels about her or because he genuinely doesn’t think he’ll survive (thanks mom for the vote of confidence), but he is utterly determined to make sure that Katniss doesn’t die. Every step he makes the entire time is for her. And it’s this selflessness that guarantees his own survival. Without it the viewers in the Capital would not have been so in love with his story of young love. Without it Katniss never would have done all she could to help him as well. His feelings for her carried them both through.

”District Twelve. Where you can starve to death in safety.”

Maybe if I had thanked him at some point, I’d be feeling less conflicted now. I thought about it a couple of times, but the opportunity never seemed to present itself. And now it never will. Because we're going to be thrown into an arena to fight to the death. Exactly how am I supposed to work a thank-you in there? Somehow it just won’t seem sincere if I’m trying to slit his throat.

Pity does not get you aid. Admiration at your refusal to give in does.

Before I can stop myself, I call out Peeta's name.

”Remember, we're madly in love, so it’s all right to kiss me anytime you feel like it.”

"Besides, it's the first gift that's always the hardest to pay back."

You guys I could keep talking about The Hunger Games for days. I took at least 4 pages of notes when listening this time around, but I’ll spare you all of my notes. I left out spoilers as much as I could. Overall The Hunger Games was an emotional read for me—the first time and this second time. I was impressed both times with the utter desperation that these characters feel. How utterly terrifying it would be to be thrown into this situation from any single character’s perspective was all that played in my mind. To find love but have it ripped away from you. This is why The Hunger Games turned into such a franchise like it has. The world building was wonderful, sure, but it’s the basic human emotion that carries any world that extra mile.

Posted by Somewhere Only We Know at 11:47 AM