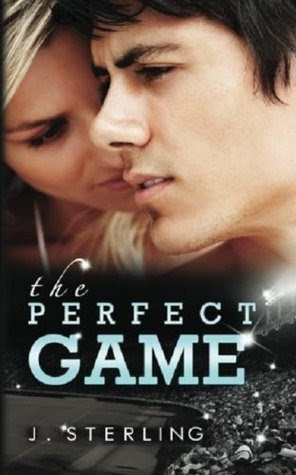 Goodreads description--He's a game she never intended to play.
And she's the game changer he never knew he needed.

The Perfect Game tells the story of college juniors, Cassie Andrews & Jack Carter. When Cassie meets rising baseball hopeful Jack, she is determined to steer clear of him and his typical cocky attitude. But Jack has other things on his mind... like getting Cassie to give him the time of day.

They're both damaged, filled with mistrust and guarded before they find one another (and themselves) in this emotional journey about love and forgiveness. Strap yourselves for a ride that will not only break your heart, but put it back together.

Sometimes life gets ugly before it gets beautiful...

I picked up The Perfect Game because my SNL and follow blogger, Holly @ Words Fueled by Love, gave it 4.5 Stars. We typically feel pretty similar about the books we read, so since she enjoyed this one so much I thought I might too. And well things were moving along smoothly until I got to about the 70% mark and then I wanted to throw the book across the room, scream and holler, pitch a fit, not pick the book back up, and ask “how in the world does this = 4.5 Stars?” So…yeah….

Jack is your typical NA male. He’s a playboy. And Cassie is your typical NA female. The one woman in the world that our playboy here could possibly turn his life around for. What I did like about this typical couple was that Jack doesn’t really seem to fight his attraction to Cassie. He knows pretty quickly that she’s different and that he wants to be different in order to be with her. He does a 180 from playboy to dedicated boyfriend pretty quickly. Cassie, of course, has trouble trusting his loyalty, especially because she has a scarred past with her father making promises that he either can’t or won’t keep. But Cassie and Jack make things work.

I really enjoyed the baseball aspect of this book. I played softball in high school and really loved playing the sport. I have to say that watching is a lot less fun in my opinion. But Jack is a superstar pitcher bound for the big leagues. And that brings with it a lot of challenges that he and Cassie have to overcome. When he does get drafted they are forced into a long distance relationship and the groupies up their game 100 fold.

The big conflict in The Perfect Game wasn’t a shocker yet it made me pretty angry. Having lived this conflict in my own life in the past, the conflict itself made me sick to my stomach. I typically steer clear of books with this particular conflict, and truthfully probably would have steered clear of this one had I known what was going to happen. But I didn’t know. So yeah. Jack made some terrible decisions throughout the latter half of this book. And while I don’t know that I could (or would) have been able to forgive him, I truly do love seeing characters take the leap and forgive the unforgiveable. It’s not shown in YA/NA literature enough that’s for sure. Characters typically seek out revenge despite how unfulfilling it is.

The ending left me torn. Mostly I felt like it was a little too pretty. Everything tied up so nicely consider how major the conflict was—forgiveness or not. While I do love HEAs (happily ever afters), this one just seemed too neat.

Ultimately, it was really hard to figure out how I wanted to rate this one. On the one hand, I really enjoyed the majority of the book (the 1st 70%), then I HATED the next 10-20%, and with the ending being just a little bit too pretty, I left like the last 10-20% was mediocre. Because of these mixed feelings, The Perfect Game gets 3 stars from me. Have you read The Perfect Game? What did you think? Let me know!

“…I don’t trust myself with you.”
He folded his arms across his chest. “And why’s that?”
“Because I can’t tell whether or not you mean the things you say.”
He uncrosses his arms and leaned into the table again. “What does your heart tell you?”
“Who cares? My heart’s dumb! It believes anything,”…
“So your head wants proof and your heart wants reassurance?”

[have you ever thought about]"how pretty and beautiful words can be? How easy it is to say the things you think someone wants to hear. How you can affect a person’s entire day with just a few measly sentences?”
My slight smile dropped. “But when you don’t follow them up with any action, they’re completely pointless. They’re just sounds and syllables. But they mean absolutely nothing.”