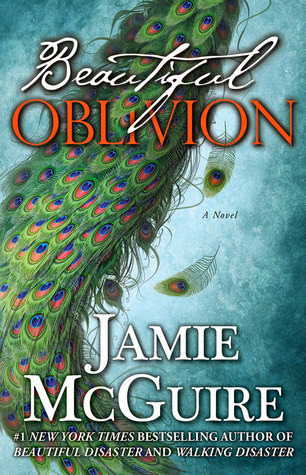 We meet Trent Maddox in Beautiful Disaster. He’s a fairly present character during that book even though Beautiful Disaster and Walking Disaster follow Travis Maddox (Trent’s brother) and his relationship with Abby Abernathy. I was totally unaware of this, but Beautiful Oblivion takes place during the same span of time as Beautiful Disaster, and I just loved that. I mean that’s life, right? Things are going on with every single person at the same time. Plus I loved seeing the crossovers. I will say though that we mostly only saw Travis during the off again times of his and Abby’s on-again-off-again relationship—which makes sense because Cami works as a bartender. And we rarely see Abby at all. Only occasionally. Anyway, my main point is that I felt like I knew Trent a little bit at the start of Beautiful Oblivion.

Also, Jamie McGuire included a little tidbit about the bar that Cami works at being really empty during the times that Travis had a fight scheduled, and then the crowds would come in all hyped up. The guys would often get into fights because of all of the testosterone riding high from the fight. I thought that was a pretty smart detail to include. It’s the little things, right?

Since I don’t read reviews of books I plan to read, I never read any reviews of Beautiful Oblivion, but it seems like I saw some negative reactions to this book. I don’t even remember hearing anything concrete, but I went from being really excited to read Beautiful Oblivion as soon as possible to feeling like it would be just fine as long as I got around to it eventually. But that made me go into Beautiful Oblivion with fairly low expectations. And those expectations were totally exceeded.

Trent is described as having been almost as big of a playboy throughout his life as Travis, but thankfully, he pretty much had Cami in his sights the entire book so we didn’t really have to deal with that. I get sick of reading the same male character over and over. He was definitely the one doing the pursuing in this book—exactly how it should be. Trent was so easily likeable. He’s just a good guy. And I love that he doesn’t just take "no" as an answer but not really in a creepy way.

Cami starts out the book getting stood up by her current boyfriend. It wasn’t the boyfriend's choice really. They have a long distance relationship and he’s currently pursuing a career that is his priority. He discussed all of that with Cami before they started dating, and she said it wouldn’t be a problem. And here’s the thing…it probably would not have been a problem had she not been repeatedly exposed and pursued by someone who actually lived near her. Trent lets her know that he’s interested in her, but they remain just friends…until well they cross that line.

Cami was a bit of a struggle for me when it came to the major conflict. I don’t mind there being hints that there’s something the reader doesn’t know. As a matter of fact, that’s a good thing. BUT, this suspense lasted through the entire book. I mean I’ll say that it was totally worth it once I found out what the big secret was, but getting there was slightly frustrating. I was shouting at her to just tell Trent whatever secret was involving with TJ, the guy she started the book dating. I felt kind of stupid once I found out what the secret was because dude…I seriously could have figured that out if I had been paying attention. I spent the entire day after finishing this book going over it in my head and remembering places where I’d obviously missed the clues. Whoops! But, missing it made this book more enjoyable for me.

While there is a good bit of language, Beautiful Oblivion wasn’t as physically graphic as I believe Beautiful Disaster was. I could be wrong about that because it's been a while since I read that one. Anyway, I appreciated that the description wasn’t overkill in that area.