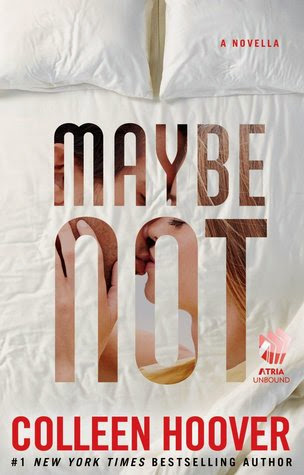 Goodreads description--Colleen Hoover, the New York Times bestselling author of Maybe Someday brilliantly brings to life the story of the wonderfully hilarious and charismatic Warren in a new novella, Maybe Not.

When Warren has the opportunity to live with a female roommate, he instantly agrees. It could be an exciting change.

Especially when that roommate is the cold and seemingly calculating Bridgette. Tensions run high and tempers flare as the two can hardly stand to be in the same room together. But Warren has a theory about Bridgette: anyone who can hate with that much passion should also have the capability to love with that much passion. And he wants to be the one to test this theory.

Will Bridgette find it in herself to warm her heart to Warren and finally learn to love?

Maybe Someday, unfortunately, has been my least favorite Colleen Hoover book. It was good writing, but I couldn’t get past the cheating factor or feeling like Sydney was Ridge’s second choice. But one of the bright spots in that book for me was Warren. So when I learned that she was writing a novella for Warren and Bridgette I was beyond excited. Of course, I assumed it would be more adult than Maybe Someday was because let’s face it…it’s Warren.

You guys, I enjoyed this short novella way more than I expected to. Warren’s feeling for Bridgette were so much deeper and more genuine than I expected or picked up on in Maybe Someday. I loved seeing how much Warren kept to himself for Bridgette’s sake. Speaking of Bridgette…I just really wasn’t sure how to read her in Maybe Someday. I mean we get some insight, but nowhere near the level we get with Maybe Not. And like Warren’s feelings being so much deeper and more genuine than I expected, Bridgette’s feelings were just as real and just as private. It fit these characters perfectly.

Have you ever read a re-telling or another perspective branching off of an original book that you felt like the author was stretching to make things fit? Well that’s not at all what happens with Maybe Not. Maybe Not feels so genuine and each piece of the puzzle fits so perfectly that it blows me away that Colleen Hoover didn’t have this story written (at least in her head) 100% before/while writing Maybe Someday. None of the pieces felt forced or a stretch. I shouldn’t have been surprised because Losing Hope felt the same way to me when she did that re-telling.

I was also concerned with the title. I mean Maybe Not didn’t sound like the title to a book with a happy ending, but I loved how she handled the title and what it really means. It’s not what you initially think it would be. Speaking of things not being what you expect, while subject content was definitely more adult than some of her other stories, Maybe Not was more tame and toned down than I expected.

-"The only difference between falling in love and being in love is that your heart already knows how you feel, but your mind is too stubborn to admit it." Then I whisper in her ear. "But take all the time you need. I have nothing but patience for you."

-"I don't want you to change, Bridgette. I'm not in love with who you could be, or who you used to be, or who the world says you should be. I'm in love with you. Right now. Just like this."

In the end, I loved Warren more. Understood Bridgette better and even developed a soft spot for her. And this was further confirmed that Colleen Hoover is one of my all-time favorite authors ever. Maybe Not gets 4 Stars for me. Have you read Maybe Not? What did you think? Let me know!