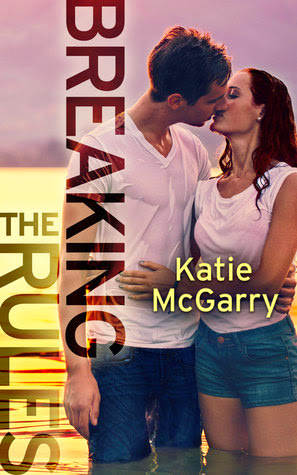 For new high school graduate Echo Emerson, a summer road trip out west with her boyfriend means getting away and forgetting what makes her so... different. It means seeing cool sights while selling her art at galleries along the way. And most of all, it means almost three months alone with Noah Hutchins, the hot, smart, soul-battered guy who’s never judged her. Echo and Noah share everything — except the one thing Echo’s just not ready for.

But when the source of Echo’s constant nightmares comes back into her life, she has to make some tough decisions about what she really wants — even as foster kid Noah’s search for his last remaining relatives forces them both to confront some serious truths about life, love, and themselves.

Now, with one week left before college orientation, jobs and real life, Echo must decide if Noah's more than the bad-boy fling everyone warned her he'd be. And the last leg of an amazing road trip will turn... seriously epic.

I love Katie McGarry’s writing. She hooks me. She sucks me in. She gets me to care about the characters on the page. And I usually love every word of it. But Echo and Noah had their happy ending. I’m always nervous when characters I love get their happy ending in one book, I think that’s the end of the story, and then bam more conflict, more fights, and more drama. So I was scared about what Echo and Noah would face in round two. Yet, (this is only a spoiler if you haven’t read Crash Into You) we know that Echo and Noah are together and happy later on in the series. Breaking the Rules takes place after Pushing the Limits but before Dare You To and consequently before Crash Into You. So I at least went into Breaking the Rules knowing that no matter what conflict Echo and Noah come up against they make it out on the other side together and happy. I can’t tell you how comforting it was to know that.

Echo and Noah are still the same Echo and Noah I came to love in Pushing the Limits, but both characters come with a lot of baggage. Both have scarred pasts (literally), and both have endured even more since finding each other. And as anyone who’s been through any kind of pain in their lives (which is everyone, right?) knows…painful experiences are…well…painful. And Echo and Noah can’t just skip over that part. Noah has to face the demons of guilt he feels over his parents death and knowing that his mother has a family that she kept from him. And Echo has to face her grief over Aires death and try to find some way to move forward toward forgiving her mother. All of that is on top of Echo and Noah figuring out how to pursue their separate dreams (art and college) while somehow, someway staying together through it all yet not holding the other back at the same time. Essentially, it’s a complicated equation.

There were times when both Echo and Noah frustrated me in this book. Not to the point of wanting to put the book down or loving them less, but enough for me to want to rough them up. We all make dumb decisions, right? And sadly it’s those decisions that we usually end up learning the most from, and that was true for Echo and Noah. Those times when I wanted to smack them, they kind of wanted to smack themselves. So that helps.

Katie McGarry did a great job of pulling in catch phrases from Pushing the Limits that really made me feel like I was back in Noah and Echo’s heads…like how Noah calls Echo his siren. And how Echo thinks Ms. Collins reminds her of a Labrador retriever. It’s the little things. Speaking of…here are my favorite quotes:

-”I’ll never let you get so far in front of me that I can’t catch you.”

-“The sole reason a constellation exists is because it’s a sum of its parts. To lose one of those parts…it’s painful and irreversible.”

-”I don’t want to lose the way you look at me—like I’m something…someone.”

-I bite my tongue, wishing I could utter the words, I love you more now, and it scares me. Please, please, please never leave.

-“God sifts us all like wheat. He refines us like flour. He works through the good in our lives and through the bad.”…

I loved the section with Noah’s uncle that I started to quote (next to last) above. I wanted to quote that whole paragraph, but decided to save it for you to just read in the book itself. So often characters in these books don’t believe in God (Noah battles with that himself), and often times I feel like that is a direct result of the author themselves not believing in God…or maybe it’s just the popular thing these days…or maybe it’s just easier for the author not to have to include God in a story that isn’t really ABOUT God. Whatever the reason for most YA books leaving Him out altogether, I absolutely loved that Katie McGarry included this section. I didn’t feel like she was pushing God on the reader. Noah still isn’t convinced what he thinks or believes, but I just loved that it was included.

Also, since Breaking the Rules has more adult themes than Pushing the Limits and Echo and Noah take things farther physically, I felt like Echo’s response to that aspect of their relationship was one of the most genuine that I’ve ever read. I think these are the things that every girl thinks and feels. And I find it utterly unrealistic that anyone can go from insecure and scared to confident and fearless in one jump. So I loved how honest this part was.

*Also, I loved the small snippet of Nowhere But Here included at the end. I’m stoked to read more about Oz and the new series.