From the Ashes: City of Glass 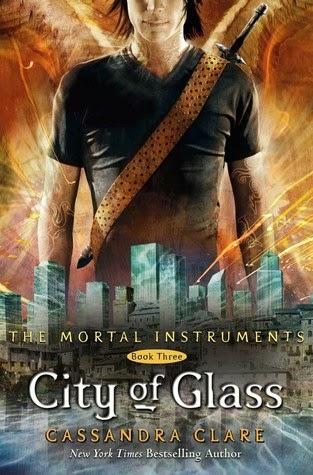 City of Glass (The Mortal Instruments, # 3)

Goodreads description--To save her mother's life, Clary must travel to the City of Glass, the ancestral home of the Shadowhunters - never mind that entering the city without permission is against the Law, and breaking the Law could mean death. To make things worse, she learns that Jace does not want her there, and Simon has been thrown in prison by the Shadowhunters, who are deeply suspicious of a vampire who can withstand sunlight.

As Clary uncovers more about her family's past, she finds an ally in mysterious Shadowhunter Sebastian. With Valentine mustering the full force of his power to destroy all Shadowhunters forever, their only chance to defeat him is to fight alongside their eternal enemies. But can Downworlders and Shadowhunters put aside their hatred to work together? While Jace realizes exactly how much he's willing to risk for Clary, can she harness her newfound powers to help save the Glass City - whatever the cost?

Love is a mortal sin and the secrets of the past prove deadly as Clary and Jace face down Valentine in the third installment of the New York Times bestselling series The Mortal Instruments.

City of Glass is going to be hard for me to review without spoilers. First off, the prior two books have had the major conflict going on about whether Jace and Clary are actually brother and sister or not. This was my biggest concern going into City of Glass the first time through. I wanted so bad for them not to be siblings. I mean for one if they turned out to be siblings I was going to feel slightly grossed out—more than I already did just reading about them potentially being siblings. I can’t tell you which way the book went. I can only tell you that if this aspect bothered you then just keep reading.

My first reading of City of Glass was years ago. I’m talking 6+ years ago. I’m surprised that I’m just now re-reading this series as it has been a favorite of mine for quite some time. But I do remember that there were aspects of City of Glass that I predicted fairly early on. I think one of the biggest twists was pretty easy to spot, and especially so since this was a re-read for me.

There’s so much going on in this book, and so many storylines have to come together starting from hints that were dropped in City of Bones and City of Ashes all the way through this book. Each character has a part to play and each part is of great importance. Alec and Magnus—while I like each character individually—officially annoyed me with this book. I guess truly Alec isn’t really my favorite at all. I enjoyed seeing Isabelle and Simon draw closer in this book. Even though this doesn’t spring into anything romantic at this point, I liked seeing them have a special sort of bond. All of the side characters: Luke, Amatis, Jocelyn, Sebastian, Maia had much to contribute to the book and the series up to this point. Each one feels fully fleshed out.

And of course we get more backstory on Valentine & Jocelyn—how she could even fall in love with a man like him. We find out more about the Circle. And we see why Jace and Clary have abilities and talents that no ordinary shadowhunter has. I liked that while Clary was involved in the final battle and saving the day, it wasn’t because she all of a sudden knew how to fight. Clary worked her magic in a way that was completely legit to who she was and what she can do.

There was one aspect involving Jace and a lake and a wish that I remember feeling like was too easy the first time I read this, and I can’t say I really felt any differently during this read-through. Especially considering the ending of Clockwork Princess.

***Highlight for spoiler: I do find it interesting that the major conflict throughout the first three books of this series revolves around Clary/Jace being in love with each other who they think for a period of time is their sibling. But yet when we find out that Jace isn’t Clary’s brother—instead Sebastian is—it still turns out that Sebastian has a twisted fetish about his sister in a very physical way. Of course we don’t know the extent of that at this point, but it’s there. End spoiler***.

I wish I’d taken notes on my favorite quotes, but since I was listening to an audiobook version this time through I decided not to worry about that. Audiobooks can be really hard to quote from sometimes.

All in all, City of Glass was a really good book. It was thought to be the series ender for The Mortal Instruments series until Cassandra Clare decided that these characters’ stories weren’t finished. I love how each piece of the puzzle from book 1, City of Bones, all the way through this book is tied together and means something. Very little is included that does not have a specific purpose. And even though I would have been happy with this book ending the series, I do think Cassandra Clare picks the right threads to pick back up and carry on with through the remaining three books. City of Glass gets 4.5 Stars. Have you read City of Glass? What did you think? Let me know!