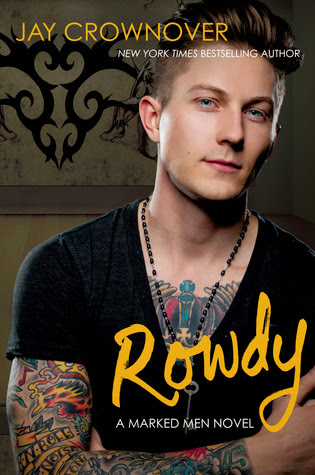 Man I get sucked into these books. I love how different the Marked Men are from a lot of the leading male characters from most mainstream YA books. Granted, the Marked Men series is technically new adult. But still. These men are covered in tattoos, sometimes piercings. They each have their own style, as do the female characters that they’ve paired off with. Rule has a mowhawk that he’s prone to dying it any and every color. He’s tattooed and pierced. Shaw is more classy, or has been. But she rocks a unique hair style and a couple of piercings herself. Jet wears tight jeans and is into super heavy metal music. Ayden is prone to wearing cowgirl boots. Rome is a huge military man, but isn’t pierced or tattooed. Cora is tiny, described as pixie-like and tattooed and pierced as well. Nash has flames tattooed on his skull. Saint is a nurse and is pretty tame. Rowdy rocks an old school, classic look, but is covered in tattoos and has a couple of piercings himself. And then Salem seems very pinup. With styled hair, perfect makeup, and bright red lips—also sporting both tattoos and piercings as well. And then Asa is blonde with a huge Southern drawl. We don’t know much about whether he’s tattooed or pierced yet, but we will find out for sure. Finally Royal is red headed and in crazy good physical shape. I love how they all fit into on cohesive group, but yet they’re all distinct individuals as well.

Rowdy is a character that I’ve been intrigued by since Rule. He’s been the voice of reason several times over the past four books, and I was sure that there would be more going on below the surface than it seemed. I’m glad to have finally gotten his story. And Salem fits him so well.

Can I just take a minute to say that I don’t love this cover. Or well I’ve struggled with all the covers minus Jet. I’m sure it’s like next to impossible to find a cover model that already has Rowdy’s hair color, style, etc, but also has legit tattoos. But this is one of those times when I really wish the model matched the description a bit better. Rowdy has blonde hair styled in a pompadour (which this model does have the style, but not the color). But he also has an anchor tattooed on his neck. And so yeah, finding a blonde guy who rocks a pompadour to be a cover model would be difficult, but then to get him covered in specific tattoos would have required a bit more work, but how hard would it have been to get a fake anchor tattoo mocked up and put on this cover model? I don’t know. It was just a bit of a letdown. Rule, Jet, and Rowdy have the more attractive physical description for me personally out of the group, so I would have liked this model to fit Rowdy’s description better is all.

As far as the plot goes, nothing about Rowdy really surprised me. The twists and surprises were a bit obvious to me. The conflict was fairly predictable, but I do have to give Jay Crownover props because Rowdy had the potential to have some extremely frustrating conflict had the characters behaved in a way that I feared they might. Kudos for not including that mess in the book. I’m glad that even though the conflict was a bit predictable that it didn’t go down a path that would have had me banging my head against the wall as new adult books sometimes can. Included with the predictability of this book, there were a few clichés that did cause a few eye rolls. Of course, Salem’s dad would be a kooky “Christian”…because non-kooky Christians don’t exists right? *HUGE EYE ROLL* Though I will say, that I enjoyed Rowdy’s belief in things always happening for a reason. While I don’t see how it’s any more believable to some people to credit “fate” over an omnipotent being like God for things like that, I did enjoy that Rowdy has a spiritual side.

As always, Jay Crownover begins to weave the next book, Asa into this story. I love how she chooses to do that because it totally ramps me up for the next book. When I first heard that Asa was getting his own book, I wasn’t even sure why, but now I know. And I’m totally in. He’s probably my least favorite character of the series, but that’s okay. I’m expecting good things from him, especially considering who he’s paired with. I really wish that Jay Crownover would just keep writing in this series forever. I never want her to leave these characters. With every new character introduced in each passing book I wonder “will this character get their own book?” And the answer each time for me is “I HOPE SO!”

Even though Rowdy was predictable all around for me, I still love this series. I get sucked in every stinking time. I love being able to see the growth in Jay Crownover’s writing over the course of this series. And to that point, I picked up a book by a debut author right after finishing Rowdy and was immediately struck with a contrast in the writing maturity. Jay Crownover has a smooth writing style. It’s not what I would call “beautiful” or “poetic”, but it is most definitely easy to read and gripping. Rowdy gets 4 Stars from me. Have you read Rowdy? What did you think? Let me know!