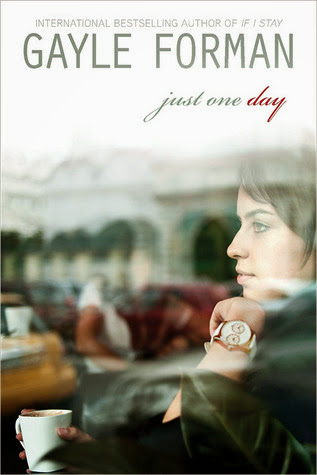 Allyson Healey's life is exactly like her suitcase—packed, planned, ordered. Then on the last day of her three-week post-graduation European tour, she meets Willem. A free-spirited, roving actor, Willem is everything she’s not, and when he invites her to abandon her plans and come to Paris with him, Allyson says yes. This uncharacteristic decision leads to a day of risk and romance, liberation and intimacy: 24 hours that will transform Allyson’s life.

A book about love, heartbreak, travel, identity, and the “accidents” of fate, Just One Day shows us how sometimes in order to get found, you first have to get lost. . . and how often the people we are seeking are much closer than we know.

The first in a sweepingly romantic duet of novels. Willem’s story—Just One Year—is coming soon!

You guys, I crack myself up. No matter how hard I try to avoid finding out too much information out about a book before reading it in order to avoid expectations and therefore being disappointed by those expectations, I still find myself frequently saying in various reviews that whatever book wasn’t what I expected. It’s really quite humorous when I think about it. But that’s kind of where I am with Just One Day. I’ve read and loved If I Stay and Where She Went by Gayle Forman. Reading those was enough to tell me that I wanted to read more of her books. And then the reception that Just One Day received when it first released had me saying “yep, that’s one I’ll have to check out.” Well of course when it went on sale, I had to scoop it up for my kindle. And I’m glad I did, but somehow along the way I developed those pesky expectations that I was trying to avoid. Or maybe I didn’t. It’s weird. It’s not like I had some elaborate story already built up in my head that I expected Just One Day to be—as a matter of fact, I honestly don’t remember reading the description for this book at all—but at the same time after reading Just One Day I can completely say that it was nothing like I was expecting. How does that even happen?

I can really relate to Allyson in a lot of ways. She’s pretty predictable and “safe.” She doesn’t do spontaneous. She doesn’t do wild. She doesn’t go out drinking with the other kids on the tour she’s on—not even with her best friend Melanie. She doesn’t understand why this guy she’s just met—Willem—could possibly be interested in her. But she doesn’t want to be that way anymore. She wants to live life to the fullest and experience new things. She just doesn’t really know that yet.

Willem…well…I’m a little torn on him. I love the idea of him being a leaf in the wind—going wherever the wind takes him. But yet, I find myself being just as guarded and assuming the same things that Allyson does. There are red flags with him. Yes, it’s possible that they could be explained away, but they’re not comforting at the same time. I didn’t know this before reading Just One Day, but apparently Just One Year is not specifically a retelling, but backtracks a bit. It tells a period of events when Allyson and Willem aren’t together from his POV. I’m not exactly clear on where Just One Year ends in their story, but I’m afraid I’m not going to be excited about that. Anyway, I said all of that to say that I think what the reader is supposed to get from Just One Day about Willem’s character will probably be quite different from what Willem’s story actually is in Just One Year.

As for the story itself, there were lots of moments that I felt were unrealistic (I mean I don’t care how sappy your story, but *highlight for spoiler* a hospital is NOT going to give you information about another patient, especially not their address). Yet, Just One Day had a fun and exciting feel to it (for the first 45%). The next 45% was what I wasn’t expecting, and I don’t want to go into too much detail about that part. And then we’ve got the last 10% which felt a bit unsatisfactory to me. I will say that the ending made me want to pick up Just One Year immediately, but not knowing the exact timeframe that Just One Year covers has me putting on the brakes and not rushing out to purchase it immediately.

I will say that I really enjoyed the highs and lows that Allyson’s relationship went with Melanie. Everything surrounding those two felt very realistic.

-…being with Melanie makes me feel like I’m losing a race I didn’t even know I’d entered.

-“I think the double happiness is the two halves finding each other.”

-Stains are even worse when you’re the only one who can see them.

-There is no opposite of stain

-Once accidents happen, there’s no backtracking.

This is probably going to seem really random to mention in this review, but for all the talk of duplicity, of people pretending to be someone else (or something else), etc, Just One Day had me thinking about Catfish. It’s not like this was a story about a catfish or someone being catfished, but it definitely made me think about it a little deeper. Just something funny I noted while reading.

Just One Day was extremely well-written. Gayle Forman had me devouring this book once I got started. The story wasn’t what I was expecting which was both a good thing and a bad thing. The characters we likeable, and I was rooting for a win the whole time. Parts of Just One Day felt spot on and realistic while others had me saying “that would never happen.” I couldn’t stop thinking about Just One Day for a couple of days after finishing it, but at the same time, I don’t feel the intense desire to rush out and get my hands on the sequel, Just One Year, even though I do hope to read it eventually. Just One Day gets 4 Stars from me. Have you read Just One Day? What did you think? Let me know!