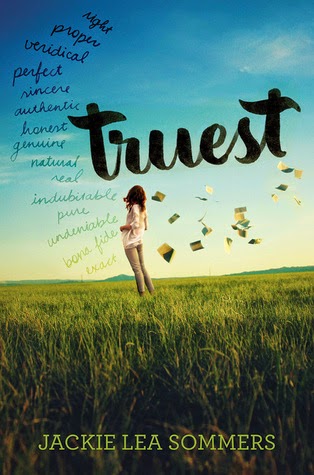 Goodreads description--Silas Hart has seriously shaken up Westlin Beck's small-town life. Brand new to town, Silas is different than the guys in Green Lake. He's curious, poetic, philosophical, maddening-- and really, really cute. But Silas has a sister-- and she has a secret. And West has a boyfriend. And life in Green Lake is about to change forever.

Truest is a stunning, addictive debut. Romantic, fun, tender, and satisfying, it asks as many questions as it answers.

I requested Truest several months ago, and as happens sometimes, I totally forgot what it was supposed to be about by the time I needed to pick it up and start reading. I like when that happens because I don’t go into the book with any preconceived ideas of what the book is going to be like. But sometimes that has negatives too because I really couldn’t remember why I wanted to read Truest. I only knew that the release date was fast approaching. So I picked it up. And I read the first 10% fairly quickly. But I got sidetracked with a couple of other books and ended up putting Truest down for a bit. When it was time to come back to it, I remembered that I read that first 10% quickly, but I didn’t feel a draw to really pick it back up. At this point, I started thinking “maybe I need to just DNF this one and move on.” But then I remembered that I’d recently updated my review policy to state that I won’t do a DNF review on a book until I’ve read at least 25%. So I decided to press on. I could read at least 15% more and if I still wasn’t feeling it then I could easily put it down and do that DNF review. But I ended up getting hooked.

There is SO much going on in Truest. So much. Let’s start with West. West is the daughter of a preacher. Her parents are still together. She has two younger siblings. This is the summer before her senior year of high school. She has no clue what she wants to major in or what career she wants to have after college. Her best friend, Trudy, is going off to adventure camp for the summer and leaving her high and dry on her summer car detailing business. And her boyfriend, Elliot, is working overtime on his parents’ farm to earn enough money to buy his own car. The community places a lot of demands on West’s father as the local preacher so that he frequently puts work and the needs of others above spending time with his family. This has really served to create a bitterness inside of West towards the members of their congregation, her father, and even at times God.

Going along with her father on one of his house calls at the beginning of summer, West is introduced to a new family. Silas and his twin sister, Laurel, are West’s age. Something is going on with Laurel, but she doesn’t know what. And Silas ends up getting signed up to be her new detailing partner. West doesn’t know what to think about the twins. But through spending time working, Silas and West become friends. She has no one else to hang out with through the majority of her summer with Trudy being away at camp and Elliot working all the time. West and Silas start hanging out outside of work and thus West’s exposure to Laurel increases as well.

The description is really vague around Laurel’s secret so I feel like this might be considered a spoiler (proceed with caution), but I also don’t feel like I can accurately discuss this book without mentioning this. Laurel suffers from a psychological condition called solipsism syndrome which basically means that she can’t tell reality from dreams. Some days Laurel seems perfectly normal, and she’s handling life as best as she can. Other times, she just completely flips and loses her grasp on reality altogether. This disorder was completely foreign to me. It left me feeling just as helpless as Silas, but yet was totally fascinating to read and even think about at the same time.(end potential spoiler)

West having the knowledge that she does about Laurel’s condition puts her in a situation to get even closer to Silas. Silas can talk to her about what he feels and what it’s like to have twin go through something like this. Laurel’s disorder affects the entire family. And even at times, it forces West to choose between protecting Laurel’s secret or betraying that trust to Elliot thus driving a wedge between West and Elliot. It also puts Silas and West in a position to have many, many deep psychological, religious, etc conversations.

This book was truly multi-layered. There’s West’s relationship with her father that’s struggling and as a result affecting her own faith in God. West and Trudy seem to be slowly growing apart over the summer while Trudy is off having tons of adventures and making new friends. Granted West is making new friends as well. West and Elliot are growing apart as she and Silas continue to grow closer together. Silas is overwhelmed with a need to both protect, fix, help, etc his sister and a desire to live his own life free from being dragged down and dragged into Laurel’s constant struggles.

Personally, I really appreciated this story having the underlying discussions, thoughts, and questions about God. God wasn’t the center of the book or the story, but He certainly wasn’t kept completely separate either. And even though several of these characters have faith, they’re still imperfect people. Do I always condone or agree with the actions of the characters? No. But I really appreciated a book in today’s society where the main character wasn’t just coming out and saying they don’t believe in God, or they don’t know what to believe, or they’ve had nothing but horrible “church” experiences and thus want nothing to do with God or religion. It was refreshing and I want more. Yet, these characters don’t have it all figured out. There’s just as much that they don’t know as they do, and I think readers who might not enjoy religious aspects in their books will appreciate that these characters weren’t just trying to teach the reader a lesson about God or religion.

-“My girlfriend is in Alaska, and my sister is messed up. Your boyfriend lives on a tractor, and your best friend ditched you for summer camp. … Let’s be good to each other.”

-“If you look around at the world, it seems pretty clear that God favors redemption over perfection.”

-We didn’t know what we wanted to be true, only that we needed truth.

-And while I sat and prayed, I had the same sensation—that I was being outlined, defined, and that the definition didn’t come from me.

-“Faith and uncertainty are accomplices.”

Truest ended up being a deep read. I didn’t get bogged down with it because of that though as can sometimes happen. I still read at a steady pace, and if I had to put it down (once I was hooked) I found myself wanting to come back to it. There’s much to think about and much going on. I ended up teary-eyed during a section which is a win. And I loved that even though these characters had faith in God, they were still imperfect, they still made bad choices or did the wrong thing. It never felt like the story was trying to teach me as the reader a lesson but that Jackie Lea Sommers was truly just telling a story. Any lessons the characters learned were lessons for that character and not a moral trying to be taught to the reader. I’ve debated on what to rate this book, but in the end, I think I’m going to end up having to give it 5 Stars. Have you read Truest? What did you think? Let me know!