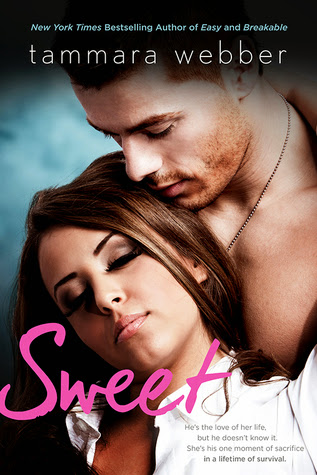 Goodreads description--He’s the love of her life, but he doesn’t know it.
She’s his one moment of sacrifice in a lifetime of survival.

He was damaged and wild, but resilient.
She’s always been obedient. Now she’s restless.

Home for the summer between college and med school, Pearl Torres Frank knows two things: Boyce Wynn is the embodiment of everything she should run from, and everything she wants to run to. Rebellious and loud. Unconcerned with society’s opinion of him. Passionate. Strong. Dangerous.

And one more trait he hides from everyone but her:
Sweet.

This is another book where the description isn't necessarily wrong, but does give the book a completely different impression than what it really is. I don't think Pearl thinks that Boyce is everything she should run from, and I don't think she's restless either. And I really don't even think Boyce is dangerous. I don't know. The description just doesn't fit. Boyce and Pearl go way back. I'm talking...all the way to when she was 5 and he was 7. After they meet at that age, the two have many more experiences together throughout their childhood and teenage years. The thing is, no one else really knows that the two have any connection to each other.

Pearl is anything but restless. She finally feels good about her life decisions and where she's going in her career. She's even standing up to her mother, who she thought would always have her back. One person who does have her back...Boyce. He seems to know her better than anyone else.

Boyce is doing pretty well for himself compared to where we last saw him in Breakable. Even though he grew up with an abusive father, his mother left him and his brother when they were young, and his brother died in the military, Boyce is making something of himself. He's taken lemons and made lemonade. He's taken over the garage that his father owned and has really turned it into a profitable business. He's become responsible. Not dangerous.

Pearl and Boyce have had a connection since they were 5 and 7. They've shared looks, a few kisses, and more in their past. Yet the two don't seem to have a clue what the other wants. It's clear that they both find the other attractive, but neither knows how deep the other's feelings go. I liked watching this relationship build as they had so much history.

The language was much more...colorful...and full of f-bombs than I would have thought. I don't remember the prior books being as bad about this, but it has been a while since I read them. The physical scenes were...well some were fairly tame and others more graphic. Sweet bordered on being a bit much for my preferences.

-"...sometimes what seems like a gut feeling is just pride pretending to be instinct."

I enjoyed the story of Sweet, and I'm glad that Boyce and Pearl got to have their story explored. Some conflict was visible to me from early on, but nothing happened that really had me rolling my eyes at the obvious. And I liked how these two were intertwined and connected from their childhoods yet still so distant until now. Sweet gets 4 Stars. Have you read Sweet? What did you think? Let me know!

Side note: I really hate the name Boyce.