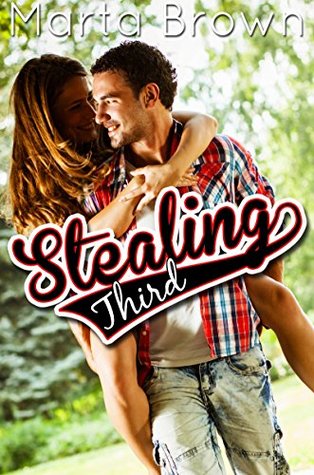 Goodreads description--For Emily, going to camp, the summer before college starts, means leaving her feuding parents alone for the next eight weeks, and coming back to divorce papers is a risk she can’t take. But no matter how many meddling phone calls, questionable hair decisions, and possibly illegal hookups she plans, her parents still march her off to Camp Champ totally against her will.

No matter. A few broken rules, and Em will be home free.

That is, until she learns Tyler Ford, her baseball coach father’s star player and her drunken party hookup, is at camp, too. And for Tyler, summer is the onramp to the biggest decision of his life: med school or major leagues. Mega hot, possibly underage Emily? A complication he does not need.

As the summer heats up with strikeouts and stolen bases will Tyler and Emily hit a home run and get what they’re after? Or will they both be thrown a curveball in the game of love?

I received Stealing Third in an Armchair BEA giveaway. I’d never heard of this book or the author before that time. Because this isn’t a book that I went out of my way to get my hands on, I probably would have put off reading it longer except for the length. I knew that once I started this book (even if I didn’t enjoy it) then I would be able to finish it really quickly. And that was the case for sure. I finished it in a couple of hours.

As the description says, Emily’s parents’ relationship has been kind of rocky lately and she’s worried that they’re going to get a divorce. She doesn’t want her family torn apart so she begins concocting all of these radical ideas and schemes to try to keep them together. Her biggest fear is that their marriage will fall apart while she’s off at summer camp and not there to intervene.

Tyler is a college baseball player (Emily’s dad is his coach) and he’s just been told that he has a chance at the minors. Yet, he’s also in school for pre-med. So he’s got a decision to make about his future. Does he want to play baseball or does he want to be a doctor? He’s not really sure. But in the meantime, he’s got a summer job shadowing the doctor on staff at the summer camp where Emily is planning to be a junior counselor.

Emily and Tyler meet at a party. They hit things off but are suddenly pulled apart with no firm plans on how to get in touch with each other from there. They’re not even sure they will see each other again. So when they both end up at Camp Champ they’re a bit surprised. Emily wasn’t exactly forthcoming about her age and the last thing Tyler wants is to screw up his future (his baseball future or his medical school future). Yet keeping the two of them apart is like a disaster waiting to happen. It can’t be stopped.

While I read Stealing Third quickly and I would say that overall I enjoyed it, there were some aspects that I didn’t love. At times the dialogue felt immature to me (both in the characters and in the writing style), and there were some major cheesy parts. I mean “Suck, Blow, Shots.” Really? I’m sure it’s a real thing, but it just felt like a better scenario could have been constructed. I’d say Stealing Third would sometimes fall into that category of books that “tell” too much versus “showing.” Showing is always better. Plus the amount of adjectives/adverbs used (specifically in the beginning) was a little overkill. My last complaint would be that everything fell into place just a little too perfectly. I like happy endings, but perfect endings I usually don’t love.

Stealing Third was a quick, light, and fun contemporary read. Although the writing felt a little unpolished and immature for my tastes at times, I still enjoyed the overall story. Would I go out and purchase Stealing Third? No probably not. But I would definitely read it if you had the option of getting it as a freebie like I did. Stealing Third gets 3 Stars from me. Have you read Stealing Third? What did you think? Let me know!