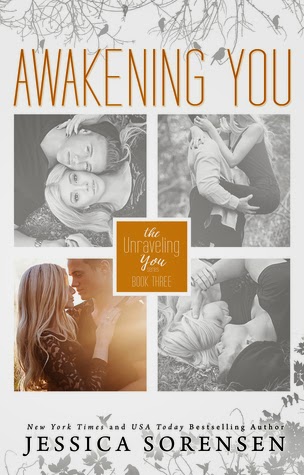 Awakening You (Unraveling You, # 3)

Goodreads description--Lately, life has been going well for Ayden. His relationship with Lyric is starting to heat up and his career in music is taking off. But the disappearance of his sister still weighs heavily on his mind.

Desperate to find out where his sister is, Ayden decides to take drastic measures. But his dangerous risk leads to the unraveling of secrets, and he’s left facing a darker past then he ever could have imagined.

I feel like a lot of this review will be a repeat of my Raveling You review. This is a different kind of series than I’m used to. Instead of each book feeling like a separate piece of the overall puzzle, each book in this series really just feels like a continuation of one story. Awakening You picks up pretty much where Raveling You left off. Ayden is still in therapy trying to recover his lost memories. His relationship with Lyric is continuing to grow and deepen even if it’s not really moving forward physically. He is becoming more and more a part of the Gregory family. Ayden is not just helping the police search for his brother’s killer, but he’s also trying to find his kidnapped (again) sister. But just as he is pursuing those who held him captive several years ago, it seems as if those people are hunting and stalking him just as much.

There are so many small pieces of this story that are moving along. Lyric and Ayden are still in a band. They’re making music together. Lyric is still working to overcome her stage freight, and she’s working on getting Ayden to agree to do a duet with her. They settle for writing a song together. And there’s even the potential (through Micha’s connections) that they might be able to tour during the summer. But Ayden can’t commit to something like that as long as his sister is still being held captive.

Fiona seems to have some strange things going on. She keeps mentioning that she can feel things before they happen or as they happen or maybe she dreams that things are going to happen. Really it’s quite unclear, but what is obvious is that Ayden’s sister, Sadie, had/has a similar ability. I’m waiting to see what becomes of that.

With Lyric’s help in the form of sketching a tattoo design for him, Ayden begins to try to move beyond his past and really make some progress on the physical contact with other people. Getting the tattoo that was branded on him covered up is a huge step in him feeling free of the people from his past while also being a giant step because of the amount of time that the tattoo artist had to actually be in contact with his skin. That, plus his increasing desire to be with Lyric in a more intimate way has him pushing past some things that make him uncomfortable. The two still haven’t progressed too far physically, and we all know that I always appreciate that.

As I already mentioned, someone appears to be stalking Ayden. Leaving him notes. Breaking into his house. Snagging a chunk of his hair. Following him. And all roads point toward the cult people from his past that held and tortured him and his siblings. I’ve been continually impressed with how frequently Lyric and Ayden both actually turn to and turn over evidence to the adults and authorities instead of how a typical series about characters this age and undergoing these circumstances would have the characters trying to tackle these big things by themselves. Kudos. That’s not to say that Ayden and Lyric always involve their parents or the police but for the most part, I’ve been impressed.

As with the previous two installments, it doesn’t feel like we’ve actually made much progress at all in the overall story. Figuring out what happened to Ayden in his past, what these people want with him, finding his sister (alive or dead), or even in moving forward in his life. It’s hard to imagine how everything will be wrapped up in just over 100 pages with the next book, Inspiring You, but I do believe that’s the last book of the series.

”…wanting to overcome something is the first step to getting there.”

Awakening You feels like just as good of an installment as the previous two. I’m so curious to know the answers to all of my questions. I do worry a little bit that the last book will be slightly rushed in trying to wrap everything up as well as reveal all of the answers about the past considering the length. But I enjoyed Awakening You all the same. Awakening You gets 4 Stars. Have you read Awakening You? What did you think? Let me know!