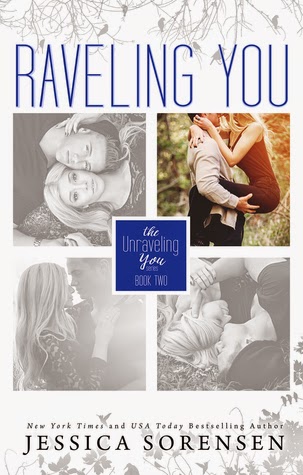 Goodreads description--Ayden Gregory may want to keep running from his nightmares, but he no longer has a choice. His past is catching up with him. And fast. He relies on one person to keep him from crumbling. His best friend Lyric Scott.

Lyric feels helpless watching her best friend’s world turn upside down. But she does her best to remain positive and upbeat. She gets their band their first gig and even with everything going on, her relationship with Ayden starts to heat up.

But when danger enters Ayden’s life again, even Lyric might not be able to help him.

Raveling You and this series (so far) kind of reminds me of Never Never in that Never Never is written in installments roughly 100 pages each and each “installment” is a piece of the puzzle but for one cohesive story. The Unraveling You series is more like 250 pages per each installment, but I say this based on how each book (again so far) has ended kind of abruptly. Neither Unraveling You nor Raveling You really felt like there was a solid ending and the story continues throughout all of the books. What I’m used to in a typical series is that there may be an overall arc for the characters or story over the course of the series, but that each book has its own conflict that has to be addressed and overcome making it somewhat independent of the others. That’s not really the case here. But truth be told, I kind of like that this is different. It keeps me progressing forward in the series at a rather rapid pace while still feeling accomplished since I’ve finished yet another book.

We find out at the end of Unraveling You that Ayden’s brother was recently murdered and his body found near the house that Ayden and his siblings were rescued from. Things intensify in this area as Ayden begins to do extra counseling called amnesia therapy in an attempt to uncover his lost memories of the time he and his siblings were held captive. The police think that anything he might be able to remember about that time might lead them to his brother’s killers. Throughout the book, it goes beyond this to the point of Ayden even potentially being stalked himself by the very same people.

Things with Lyric and Ayden intensify as well. They had a few moments in Unraveling You, but attractions and emotions are just getting deeper and more complicated. Lyric is sure about how she feels. She wants to be with Ayden, but Ayden is a little more hesitant. He doesn’t believe that he has much to offer Lyric, especially when she can’t really touch him in any real way without him falling into some kind of memory or panic attack. But his feelings for her aren’t going away either.

A few little irritants for me. 1) Lyric and Ayden both write songs and periodically moments they have together will spark a sudden section of lyrics or poetry or thoughts or something. These pieces fit in line with the story I guess, but they aren’t my favorite. And I don’t feel like they add too much to the story itself. 2) There’s a good bit of name dropping—specifically band names and song titles—which is a personal pet peeve of mine. And then 3) this is really just an observation more than anything, but it seems like almost anytime Jessica Sorensen describes an outfit that Lyric or Ayden is wearing it is always some combination of red and black.

All in all, I’m still impressed with this series, and with Raveling You. It hasn’t been anything like I expected it to be. There is some cursing and f-bombs and a few sexual situations, but nothing really too graphic at all. The characters and backstories just get deeper, and I can’t wait until all of the secrets are revealed. And the mystery behind what actually happened to Ayden and what all he’s blocked from his memory spurs me to keep reading. Raveling You gets 4 Stars. Have you read Raveling You? What did you think? Let me know!