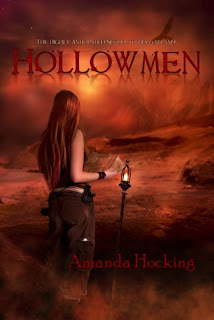 Goodreads description--The sequel to Hollowland.... After six months in the quarantine, Remy finds out things are much worse than she feared. Her plans to escape come with a heavy cost, and she realizes that zombies aren't the worst of her problems.

That's not much of a description there is it?

With Halloween quickly approaching, this was the perfect pick to get me into the mood for the season. Hollowmen picks up about 6 months after Hollowland ended. Remy’s been operated and experimented upon during the past 6 months. In the mean time, the zombies appear to be getting smarter. They’re organizing and communicating with each other. SCARY!!! And Amanda Hocking’s zombies are creepy-fast when first turned. These are definitely similar to the 28 Days/Weeks Later zombies and are personally the scariest type for me. Zombies that are crazy fast and smart too….AH!!! There’s no hope!

Because the zombies are now creating organized attacks upon the quarantine, the people in the quarantine have been grouped off and incrementally evacuated from the quarantine. Remy is almost left there to die, but with the help of an old acquaintance from the previous book, she makes it to the group of last evacuators.

I do have to say that probably more so in this series than any other Amanda Hocking series I’ve read are the “yeah right” moments. You know the ones. The ones that just aren’t possible. Like the fact that Remy stitches herself up from a gaping wound inflicted upon her by the surgeons experimenting on her and then proceeds to fight some zombies and such with little mention of the pain in her abdomen. Oh and how did she not attract extra zombie attention with the smell of her blood. Another thing I didn’t get was how paranoid Remy was over being bitten when she already knows she’s immune. I guess you probably don’t want to risk it. And there’s always a chance that a zombie could rip you apart and you’d bleed to death without the infection even playing a part. I also found more grammatical errors in this book than any of Hockings other books. But I’m willing to let it slide.

I was expecting another cliffhanger ending that Amanda Hocking likes to throw in there, but it ended in a way that left it open for the possibility of future books, but with enough closure to where if she never wrote another one in this series, I’d be okay with that. I do have predictions for at least one event if she ever adds a third book to the series. We’ll have to see whether I’m right or wrong about that.

I specifically enjoyed the addition of Boden in this installment. Stella and Max added a layer to the story, but it’s hard to believe that a six year old could survive the zombie apocalypse for so long. The scene with Clark in the bathroom was particularly graphic and thank goodness for Daniels because I was feeling pretty sick to my stomach there for a minute. As with all zombie books, characters die, but other than Remy I found myself attached to very few of the characters in this book until closer to the end, unlike Harlow, Blue, and Lazlo from Hollowland.

Hollowmen gets 3 stars form me. It was a good, quick read and a great choice to put me in the Halloween spirit. Have you read Hollowmen? What did you think? Let me know!

Posted by Somewhere Only We Know at 5:13 PM