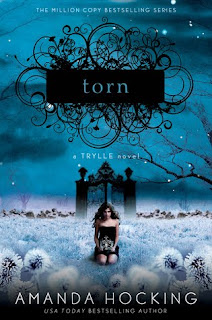 Goodreads--When Wendy Everly first discovers the truth about herself—that she’s a changeling switched at birth—she knows her life will never be the same. Now she’s about to learn that there’s more to the story…

Ok guys, so in this installment of the Trylle Trilogy, Wendy has left the safety of Forening and taken Rhys with her home. Matt’s brought in on the secret and he and Rhys start bonding. Finn, of course, shows up to bring Wendy back, but not being her actual tracker, he’s there unofficially. Duncan, Wendy’s new tracker shows up as well. But Wendy’s determined not to go back and sends them both away. Sure enough, moments after they leave, Wendy’s house comes under attack by the Vittra, and she, Matt, and Rhys are all kidnapped and sent to the Vittra dungeons.

Enter Loki. He’s one of the Vittra that was sent to bring Wendy back and he stands guard at her cell. He’s witty, flirty, and just plan HOT in my opinion.

During Wendy’s short stay with the Vittra, she learns some disturbing news about her parentage. But as expected, Finn, Tove, and Duncan show up to rescue Wendy. Loki allows her to leave offering her help that only she really picks up on. And so all are rescued and carted off back to the Trylle palace.

Because of this kidnapping, training sessions are set up with Tove to help Wendy harness her abilities of persuasion and even telekinesis. She must be able to protect herself and those she loves. With so few Trylle possessing abilities these days, Wendy and Tove are two of the most powerful Trylle around. Wendy finds out that her mother, along with Tove’s, has planned for years for them to be married. Wendy, of course, is utterly opposed to this at first because she doesn’t love Tove. He’s more like a brother to her. But she is in love with Finn who has repeatedly chosen duty and the well-being of the kingdom over being with Wendy.

Personally, I’m over Finn. I’ve been over him for a while. I’m a very direct person, blunt, and to the point. You’re either all in or you’re all out. So move on already and stop torturing each other. But that’s not how things usually work out in the book world. Characters refuse to leave those who they love but can’t be with despite what’s actually the healthier choice. It’s one thing if there’s hope at the end of the tunnel and the characters just have to go through some trials before they can break through and conquer all. But in impossible situations, sometimes it’s best to just move on already.

Elora’s headaches are getting worse, as a result of using her abilities too much. She’s having to hold Loki prisoner at the palace. He was caught snooping around and imprisoned which only serves as an opportunity for Wendy to interact with him. Wendy needs to know why he helped her. And why she trusts him.

Because Elora’s health is declining, Wendy is more involved with the political dealings around the palace. Defense meetings and such. This gives her an opportunity to see into the lives of her people and the responsibilities that she carries for being who she is. The princess. Will Wendy step up and like Finn, do what’s best for the kingdom? Or will she follow her heart despite the many times it’s been rejected?

I realize that I’ve told you more about the plot than about how I felt about this one, which is the opposite of what I usually do. I just feel like the blurbs for these books don’t really give much detail. Of course, sometimes they give too much detail, but it’s hard to explain how you felt about a book when there’s no background about what’s happening. That being said, I find myself frustrated with Wendy in a very similar way to how I was frustrated with Alice in the My Blood Approves series. Mostly because she made decisions that I just don’t see myself making. Add to that the self-sacrificing load of crap that I discussed in my review of Switched and I generally found myself frustrated.

There were a few hot scenes with Finn, but those were bittersweet because he would immediately go into surly mode and shut down. As I said before, all or nothing. I enjoyed the relationship development with Willa and Matt, and I especially loved the addition of Loki as a character. He adds mystery and the flirty behavior we’re missing from Finn. Finn chooses duty which leads him away from Wendy despite his feelings, Tove chooses duty which leads him to Wendy despite the fact that he has no feelings for her, and Loki…well he chooses Wendy despite it all. Who will she choose? Ultimately, I don’t know. I haven’t finished the series yet. I have a feeling I know who she chooses, and I don’t think it’s going to be who I want it to be. Only time will tell.

Torn, for me, gets 3 stars. Have you read Torn? What did you think? Let me know!

Posted by Somewhere Only We Know at 7:33 PM