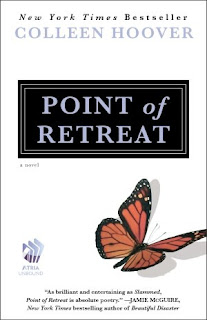 Ok guys. I liked this one just about as much as I liked Slammed. I find myself struggling with books in a series where one book seemingly has a happy ending and knowing that more awfulness is headed their way in the other books in the series. Once I get closure, I’m fine with leaving it there. If a book ends in a cliffhanger where there’s not much resolution, then I’m fine with pressing through the remaining books in a series, but not always when book 1 ends happily. And that’s kind of how things went between Slammed and Point of Retreat. Slammed ended in a place where I was satisfied, but starting Point of Retreat was disrupting my characters' happy lives. And that it did. But in this case, I was perfectly fine with the conflict because of how much I love and enjoy these characters and their relationship.

However much of a rollercoaster ride Point of Retreat was, I was extremely satisfied with the outcome. Like life in general, most times we have to go through some extremely painful situations in order to grow and learn. And with the case of love, sometimes relationships need to be tested by fire. I feel like there will probably be a lot of criticism of the ending of this one, but I was completely on board with it. There’s been nothing normal about either Lake or Will’s lives and the ending isn’t any different. They’ve both had to go through an extreme amount of grief and pain in their lives. They’ve had to grow up early. And I really enjoyed how this aspect of the characters’ lives featured something that we don’t always see in YA fiction.

I have no idea if there will be any other books in this series, I’m kind of hoping there isn’t because too much of a good thing is no longer a good thing. But I loved the relationship between Will and Lake. I loved seeing things through Will’s eyes and reading his POV.

This series embodies what I love about YA fiction. Real characters with real problems, real pain, in real life situations, forced to grow (I do so love character growth), and more mature than their ages call for. And of course, a love that is tested and strengthened by trials. Yes, yes, yes….more please.

Point of Retreat gets 4 stars from me. I only rate Point of Retreat lower than Slammed because the initially falling in love is one of my favorite parts in a book, and there were a couple of things that I wasn’t thrilled about in this one. Not enough to ruin the book for me, but enough to keep it from 5 stars. Either way, I highly recommend this entire series.

Have you read Point of Retreat? What did you think? Let me know!