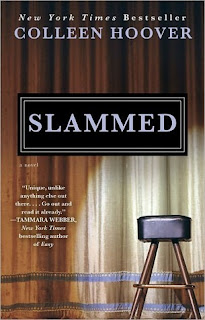 Ok guys. I’m excited about this one. Slammed is definitely going to end up in my Best of 2012. When I read the description before requesting this one from NetGalley, I was totally intrigued. Slam poetry sounds pretty awesome. I don’t actually know anything about slam poetry, and I’m not a huge poetry person myself. I can definitely respect it, and there are some poems that I love and adore. But as a general rule, my personality is too blunt and direct for poetry on an everyday basis. I love the symbolism and such in poetry and even in literature of all genres, but sometimes I’d just rather not try to figure out what things mean. I’d rather just be told what they mean. And that’s just plain lazy of me. BUT, I do love when a character in a book loves poetry, (i.e. Sam from The Wolves of Mercy Falls series by Maggie Stiefvater). And let me tell you, Will did not disappoint.

Slammed went a completely different direction than I expected with one major twist happening fairly early on in the book. Even though it happens early, I just can’t bring myself to ruin it for you because it was a game changer. For me, the book had an entire feel to it, until it SLAMMED into this plot twist.

I could not put this thing down!

Usually when I find myself reading about an impossible situation, I get annoyed and frustrated and the characters make decisions that I wouldn’t make myself. But even with the impossible situation, and even with the decisions I wouldn’t make, I never really got annoyed or frustrated with this one. This book reminds me of how I felt about Pushing the Limits. The characters have all been through so much, and what they’ve experienced makes them all very real and very human. And even though they’ve been through a lot already, their journeys aren’t over…not by a long shot.

I felt the emotion of this book and these characters very strongly. When Lake was performing her first poem for class, my heart was pounding from that nervous feeling you have of being up in front of your class and having everyone looking at you. She had a message she wanted to deliver, so her heart beat harder and faster. And I felt it. I’m not saying her class assignment poem was my favorite one ever, it wasn’t even my favorite one in the book, but I just felt that moment so strongly. And that’s just a slight example. The whole book was packed with scenes like that when I as the reader got pulled in more than most books even attempt to do.

This book...this book is one of the good ones. Slammed is one of the ones you’ll remember and you’ll refer back to, and you’ll want to re-read. Definitely add Slammed to your must read list! 4.9 Stars for me…ok…shoot, let’s go ahead and give it 5.

Have you read Slammed? What did you think? Let me know!

Posted by Somewhere Only We Know at 4:56 PM