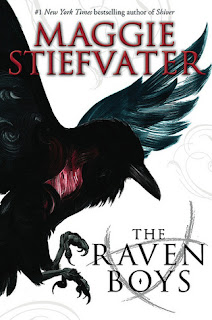 The Raven Boys didn’t blow me away. I wanted it to. This being my 7th Maggie Stiefvater book, I was expecting excellent things, but what I found was more like a case of SOANS (Start Of A New Series) Syndrome. Sometimes the first book in a series isn’t the best because there’s so much world building and character backgrounds and establishing plot lines and such that it takes getting to book 2 to really be able to love the story, and I think for me that’s what’s happening here with The Raven Boys. Normally, the first in a series is my favorite BECAUSE of the new world being presented to me and new characters I get to know. But there was a disconnect for me this time.

I think one of the things I struggled with the most was the relationships. Everyone in Blue’s family is a psychic but her, and all of her life she’s been told not to kiss anyone because if she kisses her true love then he will die. Then she finally sees a spirit who tells her his name is Gansey (granted he’s not a dead spirit…it’s almost like a prophecy spirit—meaning he’s going to die within the next 12 months). And since Blue doesn’t normally see spirits, she’s a bit freaked right. But to make matters worse, she’s told that the only reason she’d see Gansey’s spirit is if he is her true love or she kills him. I don’t think it’s irrational for someone to jump to the conclusion that both are true. If he’s her true love and she kissed him and then he died, well then he’s both her true love AND she killed him. I hope this isn’t a spoiler, but I need to say it anyway (it doesn’t feel like a spoiler to me). So I’m led to believe that it’s quite possible that Blue and Gansey are going to get their hook up on, right? Yet, throughout the entire book, Blue and Adam develop a relationship. There’s definitely a hint of a possible future with Gansey, but right now it doesn’t look like it’s really headed in that direction so much. And so I struggle with the fact that according to the book these psychics are actually very accurate, yet this one fact doesn’t seem to be panning out the way they predicted. Of course, it could always turn out that Blue truly does simply kill Gansey and he was never her true love to begin with, but that’s doubtful. Either way, I had a hard time completely connecting to the characters and their relationships with each other.

The plot definitely had points that I found intriguing and wanted to know more about but more in a secondary way than I wanted more information about the characters. I definitely felt like the search to find Glendower and the ley lines was almost more important to the story than the characters and for me it should be the opposite. There was a bit of a twist that I didn’t see coming with Noah, and even when it was revealing itself, I still didn’t connect the dots on what was actually happening until everything was spelled out. That was the biggest twist in the plot to me, and while I didn’t see it coming and couldn’t figure it out until it was over, it really shouldn’t have been the biggest twist in the book.

All in all, I wanted to love this book. I prepared myself to love this book. But I just didn’t. Out of the 7 books I’ve read by Maggie Stiefvater, this one is probably my least favorite. I’ll definitely check out the other books in the series because I’m still a huge fan of her work, but this one just didn’t have the pizzazz that her work usually has for me. Anna @ Anna Reads said it well when she said that the writing wasn’t as lyrical as we’re used to getting from Maggie S. And I completely agree with that, and I really think that was a huge thing I was missing from this book and one of the things I’ve come to expect from her writing.

I’m giving The Raven Boys 3 Stars. I wish I could give it more, but I just can’t. Have you read The Raven Boys? What did you think? Let me know!