All Broke Down - Review 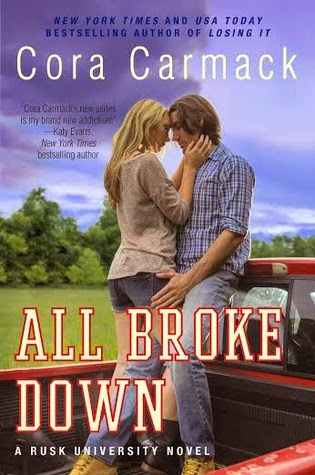 All Broke Down (Rusk University, # 2)

Goodreads description--In this second book in New York Times and USA Today bestselling author Cora Carmack s New Adult, Texas-set Rusk University series, which began with All Lined Up, a young woman discovers that you can't only fight for what you believe in... sometimes you have to fight for what you love.

Dylan fights for lost causes. Probably because she used to be one.

Environmental issues, civil rights, corrupt corporations, and politicians you name it, she's probably been involved in a protest. When her latest cause lands her in jail overnight, she meets Silas Moore. He's in for a different kind of fighting. And though he's arrogant and infuriating, she can't help being fascinated with him. Yet another lost cause.

Football and trouble are the only things that have ever come naturally to Silas. And it's trouble that lands him in a cell next to do-gooder Dylan. He's met girls like her before fixers, he calls them, desperate to heal the damage and make him into their ideal boyfriend. But he doesn't think he's broken, and he definitely doesn't need a girlfriend trying to change him. Until, that is, his anger issues and rash decisions threaten the only thing he really cares about: his spot on the Rusk University football team. Dylan might just be the perfect girl to help.

Because Silas Moore needs some fixing after all.

Ok so I just KNEW this book was going to be able Stella and Silas. So while I was looking forward to getting Stella’s story, I was also pleasantly surprised to find this story about Dylan and Silas and not focused Stella at all. Truthfully Dylan fits so much more. I’m not sure why I jumped to that conclusion—probably because Silas and Stella had a hook up in book 1, All Lined Up. Assumptions assumptions! We all know they get you nowhere good really fast, but we make them all the time.

I wasn’t sure about Silas. He seemed like a carefree kind of guy based off my experience with him in All Lined Up, so I wasn’t expecting him to be wound so tightly. Basically Silas comes from humble beginnings. His family life was rough, and luckily he had a high school coach who pointed him towards football. But Silas doesn’t feel like he fits in with the world around him. He feels like everyone else is mostly from privileged backgrounds and that one day they’ll realize that he’s not one of them—that he doesn’t belong. And so Silas does what so many people do—he self-sabotages.

Dylan and Silas are a lot more similar than they appear on paper. Even though her parents are wealthy, she’s adopted. And you can see the nine-year-old little girl who’s scared she’s going to lose the only love she’s ever known. So Dylan becomes…a people-pleaser. But recently, she’s also discovered her passion for speaking up for those whose voices aren’t heard. The biggest situation that she campaigns for throughout All Broke Down is for the homeless. Yet, I couldn’t help but feel like it wasn’t the cause so much that mattered to her—while this one certainly did hit her close to home. It just seemed like she’d speak up for the sake up speaking up and not necessarily because she personally backs the cause.

Dylan and Silas meet in jail—which I loved. Not your typical place to meet your next relationship. Silas helps Dylan live a little, breathe a little, and come out of her shell. And he helps her realize that she’s been living to please others and not at all for herself. Dylan helps Silas become more grounded. He learns that anger and violence aren’t the best reactions or coping mechanisms. He learns to look at himself and his past and let go. And she helps him learn to love himself by helping others. He essentially learns that it’s okay to make himself vulnerable for the greater good of others.

One of the things I loved most about All Lined Up was how absent sex was from Dallas and Carson’s relationship. Of course there was heat, but they waited—for a while anyway. But that was not the case with Silas and Dylan and All Broke Down. Of course, it’s Silas so I’m not sure you could expect much different. But that aspect was a little disappointing for me.

-“Next time I promise not to let my emotions get the better of me when handcuffs are involved.”

-Totally psychotic because he is way out of my league. Or I’m way out of his league, I don’t know. Either way, someone is out of someone’s league.

-“I don’t think I can change the world, but I can change one person’s world at a time. And that’s something.”

-“We cannot effect change with sheer force of will.”

-I know now why caring about another person is so…scary. It’s not that they won’t care about you back, because that either happens or it doesn’t. You live with it or you do everything you can to change it. The really scary thing is the moment you realize that for the rest of your life, you’ll feel twice the pain, twice the joy, twice the fear. Twice as helpless to control it all, too.

All Broke Down was enjoyable, but I have to say that I really liked All Lined Up better. I looked and thought, “surely book 3 will be Stella’s story,” but alas, no. It’s still not time for Stella. All Broke Down had characters that I could root for, but there was a little much physical in relation to emotional for me to love it. I’m giving All Broke Down 3.5 Stars. Have you read All Broke Down? What did you think? Let me know!