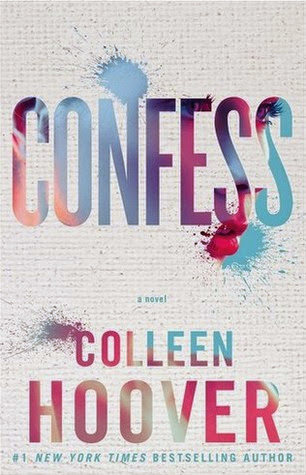 Goodreads description--From #1 New York Times bestselling author Colleen Hoover, a new novel about risking everything for love—and finding your heart somewhere between the truth and lies.

Auburn Reed has her entire life mapped out. Her goals are in sight and there’s no room for mistakes. But when she walks into a Dallas art studio in search of a job, she doesn’t expect to find a deep attraction to the enigmatic artist who works there, Owen Gentry.

For once, Auburn takes a risk and puts her heart in control, only to discover Owen is keeping major secrets from coming out. The magnitude of his past threatens to destroy everything important to Auburn, and the only way to get her life back on track is to cut Owen out of it.

The last thing Owen wants is to lose Auburn, but he can’t seem to convince her that truth is sometimes as subjective as art. All he would have to do to save their relationship is confess. But in this case, the confession could be much more destructive than the actual sin…

You guys!!!! You guys!!!! I love Colleen Hoover so much. I have to say…Maybe Someday wasn’t my absolute favorite because of the cheating, and Ugly Love even though stunningly, beautifully written wasn’t either because of friends with benefits. Confess though…Confess was what I’ve been missing from Colleen Hoover. *deep sigh*

I’m not even sure what I can or should say about this book. But I think that’s the way I almost always feel about Colleen Hoover’s books. They’re just always books that you HAVE to experience for yourself—the way they’re meant to be experienced. I almost think it’s better to go into them with as little information as possible. BUT that’s not what I do here.

First of all, she hooks you so quickly. I cared about Auburn almost immediately. The prologue is pretty traumatic, and I felt like I had a year’s worth of built up emotion and knowledge from one chapter. There are few authors I’ve read that can pull something like that off. And then we fast forward a few years. Auburn’s in Dallas and she needs to make some money. She stumbles upon this art studio called Confess, and what she finds are these notes with confessions all over the windows and a sign that says “help wanted.” And Owen, of course, owns said art studio.

Auburn and Owen hit things off quickly. Sometimes a connection is so real and so strong that it will not be ignored, and that’s exactly how things were with Auburn and Owen. As a matter of fact, it really reminded me of Will and Lake from Slammed. These two both know immediately that they feel something real, and deep, and special. And quick. But as the description suggests, Owen has a lot of secrets. And even though he’s used to reading other people’s confessions day after day, he’s not used to making his own.

Owen isn’t the only one who has secrets though. Auburn has secrets too. And when the two combine…well let’s just say that they can’t. One’s secrets will destroy the other. The description tells you that Auburn has to cut Owen out of her life because of this so that’s not a spoiler. But come on, guys! Do you think it’s a simple as that? Of course not.

The side characters are bright and despite each having fairly small roles, I felt like I knew who each one of them were deep down. Lydia and Trey I hated. Emory, AJ, and Adam I loved. Harrison and Callahan I was on the fence about, but mostly ended up liking. And Owen-Cat…well she was adorable for her small but integral piece of the puzzle.

There is nothing more attractive to me than a guy who is really and truly deep down good, but add to that one that is extremely talented—Will Cooper, Ridge borderline on the good part. Now add Owen to this list. Owen didn’t quite surpass Will for me. I can’t help it. I fell in love with Will first. But Owen blew by all of the other Colleen Hoover leading male characters—even Holder. I loved the art that was included, both in concept and the actual paintings included in the book. I loved how Owen felt about art. And I loved the confessions and how they were incorporated into each piece. The confessions themselves were shocking and my heart breaks for the people who made them, especially knowing that they are real. But it reminds me that we all have a story, we all have pain, we all have things we’re ashamed of, we all have fears, we all have hopes. We’re the same, even when we’re not.

I had two small issues with the story itself. One revolves around Trey. And the other around a specific painting. But that’s all I’m going to say due to spoilers. But neither of these things were big enough to change how I felt about the book overall.

That ending…Typical Colleen Hoover. You know, I was thinking about her books, and I love how the conflict in her books is never expected. It’s never really typical. And usually it’s something I never see coming. That’s because she’s not just mimicking other stories. Colleen Hoover’s books aren’t the same track put on repeat. And I absolutely love that because I never know what to expect. And I never know what I’m going to experience. But that ending…while not conflict necessarily….I just loved it. There were pieces that I put together, and pieces that completely caught me off guard.

-It’s amazing how much distance one truth can create between two people.

-I’m so tired of having to give up the only things in life I want.

-“I’m scared I’ll never feel this again with anyone else,” I whisper. He squeezes my hands. “I’m scared you will.”

-Selflessness. It should be the basis of every relationship. If a person truly cares about you, they’ll get more pleasure from the way they make you feel, rather than the way you make them feel.

In the end, I pretty much loved it. Confess had all the things I expect from Colleen Hoover. It had twists and turns. Things I didn’t expect. Characters I loved, and characters I hated. It had art and beauty. Love and loss. Confess does discuss the concept of fate, so those that take issue with that might struggle a bit. I had two small issues myself, but they didn’t affect how I felt about the book overall. Confess gets 4.5 Stars from me. I have so much more I want to say, but I need to stop somewhere. Have you read Confess? What did you think? Let me know!