All Lined Up - Review 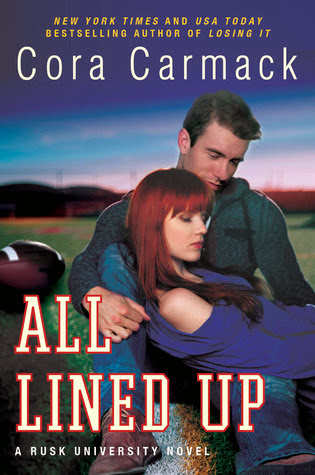 Goodreads description--New York Times and USA Today bestselling author Cora Carmack follows up her trio of hits—Losing It, Faking It, and Finding It—with this thrilling first novel in an explosive series bursting with the Texas flavor, edge, and steamy romance of Friday Night Lights.

In Texas, two things are cherished above all else—football and gossip. My life has always been ruled by both.

Dallas Cole loathes football. That's what happens when you spend your whole childhood coming in second to a sport. College is her time to step out of the bleachers, and put the playing field (and the players) in her past.

But life doesn't always go as planned. As if going to the same college as her football star ex wasn’t bad enough, her father, a Texas high school coaching phenom, has decided to make the jump to college ball… as the new head coach at Rusk University. Dallas finds herself in the shadows of her father and football all over again.

Carson McClain is determined to go from second-string quarterback to the starting line-up. He needs the scholarship and the future that football provides. But when a beautiful redhead literally falls into his life, his focus is more than tested. It's obliterated.

And neither of them know how to walk away from the attraction they feel.

I loved the concept of Dallas’s dad being the coach of her high school football team and then transferring to coach her college team as well. I grew up in a small town and it was not rare for a teacher at my high school to also have children as students as well. It was always an interesting dynamic to watch. And then Dallas thinks she’s gotten away from it all only to find out that her father has moved to coach at her college too. Talk about depressing. Of course along with that are all the dynamics that involve dating the coaches daughter. Some guys look at Dallas as their “in” with the coach while others steer clear of her out of fear of the coach.

On top of her dad being the head coach, Dallas’s ex-boyfriend, Levi, is also the quarterback for her college team. This means that all that baggage of her past has essentially tagged along with her. Dallas pretty much decides that she’s not dating football players anymore. Yet she meets Carson at a party. Carson doesn’t know Dallas and Dallas doesn’t know Carson, but they hit it off. And their chemistry is off the charts.

I recently did a post about repetitive themes in books. One of the things I complained about was the one-night stand being the first interaction between the main characters. I get so tired of relationships built off that. Dallas and Carson had a similar experience, but yet completely different. They make out, and like I said, the chemistry is off the charts. But their relationship is slow building. Even though they crossed some physical boundaries the night they met, these two pursue a friendship that’s not quite a friendship before progressing forward. And THIS I love. If this theme repeats itself in all the books that would be okay with me, because there’s substance.

I do plan to jump into the next book, which is about one side character that we meet in All Lined Up. BUT I expect there to be some frustrations because this character does seem the type to experience exactly what I was talking about above. I’m withholding complete judgment because maybe his relationship will be built off substance rather than their first encounter, but that’s yet to be determined yet.

-“We’re honest with each other, no matter how hard or awkward it is to say whatever needs to be said. We”—he uses a hand to gesture between us—“are a safe space. You can say anything to me, and I promise I’ll hear you out. I’ll listen. No matter what it is.”

-“You’re it for me. So run if you’d like, but I’ll follow. You can try to hold me at arm’s length, but I’ll never stop trying to pull you close. Be scared if you must, but you’re not going to lose me.”

-…it’s the hard days that end up being the most important in the end.