I could NOT get a good cover photo for this book. Sheesh! 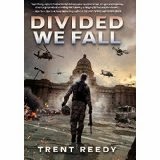 Goodreads description--From the author of the acclaimed WORDS IN THE DUST: an action-packed YA novel set in a frighteningly plausible near future, about what happens when the States are no longer United.

Danny Wright never thought he'd be the man to bring down the United States of America. In fact, he enlisted in the National Guard because he wanted to serve his country the way his father did. When the Guard is called up on the Idaho governor's orders to police a protest in Boise, it seems like a routine crowd-control mission ... but then Danny's gun misfires, spooking the other soldiers and the already fractious crowd, and by the time the smoke clears, twelve people are dead.

The president wants the soldiers arrested. The governor swears to protect them. And as tensions build on both sides, the conflict slowly escalates toward the unthinkable: a second American civil war.

With political questions that are popular in American culture yet rare in YA fiction, and a provocative plot that could far too easily become real, DIVIDED WE FALL is Trent Reedy's very timely YA debut.

Divided We Fall was a free audiobook download I got from Sync Audiobooks this past summer. I went into Divided We Fall with pretty low expectations. The thing with Sync Audiobooks is that it is totally awesome to get free audiobooks, but the downside to that is they’re not all in my normal wheelhouse. But I’ve found a couple of absolute gems through this system as well (i.e. Carter Finally Gets It). My friend Paula has been jumping on the audiobooks a lot sooner than I have been so she listened to this one a good while back, and she said that it was definitely different from our normal reads but that she surprisingly enjoyed it. And essentially that’s exactly how I felt.

There are different types of audiobook narrations. Sometimes there is one narrator who essentially reads the book with little to no inflection or acting. Sometimes there is one narrator who basically acts out the book, especially the dialogue. Other times there are multiple narrators. This usually happens when the book has multiple POVs, but sometimes there are different readers/narrators/actors for each character. Divided We Fall had the most unique combination of all of these types. There was one main narrator, Andrew Eiden, but then there were special narrations done by Trent Reedy (the author) and other person that I missed the name of that I felt like really added to the overall feel of the audiobook.

I don’t read too many war books or too many political books either. Divided We Fall had a little bit of both, but just enough Young Adult to make it relatable. So here’s the low down: Danny is seventeen years old. Over the past summer he went through basic training for the Idaho National Guard. Because he’s not eighteen yet, he can’t be deployed with the rest of his unit overseas. The President has just passed a controversial law that requires all citizens to carry a government issued ID card with a chip that includes all of their government identification information as well as all of their medical history and information. The chip is trackable, but the federal government swears they will only enact the tracker in situations where the ID card has been lost, stolen, or at the request of the owner of the card. So far this is plausible considering our own upcoming government issued ID card. However, the state of Idaho has decided that they do not want to be involved with the ID card program. (An actual State vs Federal case is how Alabama as a state voted against same sex marriage, yet because of a federal court ruling, the state was overturned.) Unrest begins in the state of Idaho which results in riots and protests (Ferguson and other various recent protests ring any bells?). The governor of Idaho calls the Idaho National Guard to service to stabilize and diffuse the rioting situation in Boise. As the description says, Danny’s gun misfires and a domino effect takes place that leads to so much more.

It’s very surprising to me that I enjoyed a book that has such a political storyline. I HATE politics. I don’t really want to discuss specific politics here on my blog, but as I’ve pointed out, so much of what sparked the events of Divided We Fall is not only plausible, but has actually happened in some form or other within the last year. One of the best parts to me was the insets of the media’s and the public’s response to all of the events. It was SPOT ON! And HILARIOUS! Almost every comment by the media or by the public within this book was almost word for word verbatim a comment I’ve heard or seen myself over the last year in relation to the topics I referenced above and others. It was so hilarious in the ridiculous nature of the media coverage and the public’s response that I couldn’t help but feel like Trent Reedy was simply making fun of every aspect of politics—both parties, the state, the federal government, the media, the public….EVERYTHING! Which I found to be awesome.

Danny himself was an extremely likable character. He joins the National Guard because his father served in the military before he died, and because Danny sees the National Guard as being a huge stepping stone to achieving his goals for his future, which include one day proposing to his girlfriend, Jo Beth. Danny’s understandably scared when he gets called for active duty for the Boise riots. And then the worst thing happens. Someone in the crowd throws a rock and hits his facemask and his gun goes off. Danny feels responsible for starting the events that follow. And even though he’s been sworn to secrecy by the governor, his name and his involvement eventually leaks. Some people think he’s a hero and others want his head. Few people stop to get Danny’s real story and assumptions begin. If nothing else, Divided We Fall showed me that we rarely know what actually happened in all of these stories that are on the news. People are so quick to jump to conclusions, to place blame, and to find someone to take out retribution on. But thankfully, Danny has a great set of friends that support him.

I was on a see-saw with Danny and Jo Beth’s relationship. Jo Beth starts off the book very interested in all things political, and before she knows of Danny’s involvement, she takes a very vocal stance against the National Guard. She’s one of the first ones to place the blame and demand blood in payment for the deaths caused during the riot. During this time, I was very anti-Jo Beth. But I came back around. Danny and Jo Beth had fights like a real couple, yet what I loved about them as a couple was how they always seemed to come back together as a united front. I ended up rooting for them even though Jo Beth has the potential to annoy me and sometimes did. I do have concerns about them for the future of this trilogy. Because Jo Beth has such strong opinions, I can see this causing more struggles to come. And then there’s also the hint of interest from two other parties—one interested in Jo Beth and one interested in Danny. So we’ll see if Jo Beth and Danny survive the series or not.

The side characters were all very developed. And I really liked each one of them. At the same time, there are multiple storylines, multiple conflicts, multiple facets being weaved together to make this book, and that’s something that I really love about good storytelling. Good stories are not one dimensional, and well Divided We Fall was a really good story.

I am so surprised at how much I ended up liking this book. Even though Divided We Fall is not my typical read, I fell into the story and into the characters. I hate politics, but I think because I felt like Trent Reedy was making fun of everything involved in a situation like this I was able to enjoy this story including the politics involved. Even more so, it was almost scary to me how truly plausible Divided We Fall is. In the end, I’m giving Divided We Fall 4 stars. And I truly am looking forward to book two, Burning Nation. Have you read or listened to Divided We Fall? What did you think? Let me know!