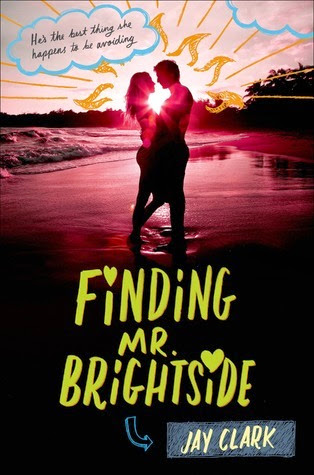 Goodreads description--Abram and Juliette know each other. They’ve lived down the street from each other their whole lives. But they don’t really know each other—at least, not until Juliette’s mom and Abram’s dad have a torrid affair that culminates in a deadly car crash. The funeral is uncomfortable, to say the least. They don’t speak.

Fast forward to the neighborhood pharmacy, a few months later. Abram is on Paxil. Juliette is on Adderall. Abram decides to say hello. Then he decides to invite her to Taco Bell. To both of their surprise, she agrees. And the real love story begins.

I’m not really sure why, but I didn’t have high expectations for this book when I started it (in November 2014). There really is no good reason why. Maybe just because I wasn’t familiar with the author? I’m not sure. Either way, I think having low expectations for Finding Mr. Brightside turned out to be a good thing for me because I was so pleasantly surprised with this book, the writing, the characters, the story, all of it. And since I read it months ago, I'm really excited to finally get to share my thoughts with you.

As the description says, Abram and Juliette have known each other for a really long time. I mean they go to school together, have classes together, but it’s not like they speak or hang out or anything. It’s just one of those “I know you, you know me” type of relationships. But Abram’s father and Juliette’s mother have been having an affair. One day they’re involved in a car accident which kills both Abram’s father and Juliette’s mother, and thus both families and the world is exposed to this affair which leaves Abram and Juliette in a really awkward situation.

I love how Abram has been intrigued by Juliette for a really long time. He just thinks that they should be friends. And so one day after being slightly stalker like, he runs into her in the pharmacy where they’re both getting their prescriptions filled. Abram’s on Paxil for depression, and Juliette is addicted to Adderall, which we learn was first given to her by her mother before she passed and Juliette’s been faking ADHD symptoms ever since in order to continue to receive her prescription. And truthfully I loved seeing this side of a prescription drug addiction story. I’ve read drug addiction stories before, but I’ve never read one that came at the subject from this angle. It felt very real and authentic especially as I know someone that takes Adderall for ADHD symptoms. This was an enlightening read from that perspective for me.

But I also just genuinely liked these characters. Juliette is so rough around the edges. She’s a hurt, grieving, angry, broken girl. And so she’s a bit of a negative energy. Yet she wasn’t unlikeable because of that. She just took a really long time to trust others, Abram included. Abram is kind of the opposite. He’s such a positive guy, especially considering the revelation of his father’s unfaithfulness and even while grieving his death. It was so refreshing to see him be open to Juliette and to life in general. I loved his efforts to pull Juliette out of her negative space and back into a much more happy and bright world—he’s Mr. Brightside. And I loved this aspect because I feel like Husband has been my Mr. Brightside as well. Even when our stories don’t relate to Abram and Juliette, I just love being able to see our relationship in some way or other reflected in other characters.

Along with Juliette and Abram themselves, I really adored Abram’s mom and even Juliette’s quirky father. Plus the neighbors, Terry & Linda. Easily likeable characters that really fit into the story and help Abram and Juliette grow and move forward.

Jay Clark’s writes from both Abram and Juliette’s perspectives, and I absolutely enjoyed how distinct their voices were. Just as distinct as the characters are, from positive to negative, and from open to closed off. It made connecting to the characters so much easier.

-Okay, enough. I’m not going to be the girl who pulls him up by the straps of his flip-flops, prunes his scraggly sideburns with a pair of nose-hair trimmers, and transforms him into four-year-college-material.

-You’re never too young to feel disappointed in your parents.

-I pick up a slinky black dress. The Chanel label I was once so enamored of seems so silly and pointless now. Just a word on a thing.

-It’s easy to be an amazing, sexy version of yourself for two-hour stretches, especially around someone who doesn’t have to live with you.

-He has a knack for sucking up all the toxic energy I bring to a room.

-“If we ever do meet, I don’t want to feel sorry for her hair the whole time.”

-“I’ll go to class if you hold my hand there,” he bargains, once again forgetting to include what’s in it for me.

-I like the way he says the wrong thing sometimes.

-…she removes a huge canister of sunscreen from an elephantine purse that rivals mine is size. I want to ask where one can purchase such a tote monster, but I don’t, because now we’re unspoken purse rivals.

-Between the Janette encounter, the girl talk with Linda, the Adderall she probably took afterward to make herself feel back in control of the situation, and the creepy master-bedroom setting she’s using to unnecessarily torture herself, it’s too much about everything else, not enough about us.