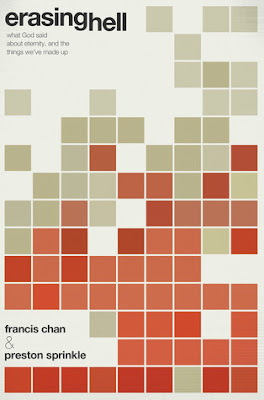 Erasing Hell: What God Said About Eternity, and the Things We've Made Up

Goodreads description--How could a loving God send people to hell? Will people have a chance after they die to believe in Jesus and go to heaven?

With a humble respect for God's Word, Francis Chan and Preston Sprinkle address the deepest questions you have about eternal destiny. They've asked the same questions. Like you, sometimes they just don't want to believe in hell. But as they write, "We cannot afford to be wrong on this issue."

Erasing Hell will immerse you in the truth of Scripture as, together with the authors, you find not only the truth but the courage to live it out.

I've had Erasing Hell in my possession for quite some time, but considering the topic I've put off reading it. Who wants to read about hell? I really didn't. But Husband and I have been talking about how there is a general lack of the fear of the Lord in our country lately it seems, and how it would do us both good to spend some time dwelling on this subject. What better subject to instill some Godly fear than hell? And so thus I decided it was time to pick this one up.

Francis Chan...wow. He certainly has a way with words. In all of the books I've read by him, I'm always impressed with his ability to be honest with himself, honest with his readers, and honest with God. He's not afraid to put himself and his short-comings out there on display in order to learn something about himself and in order to use that as an example to teach others. It's really impressive.

Francis Chan & Preston Sprinkle admit upfront that truthfully they do not want to believe in hell as a real place. They don't want to think about people that they know and love possibly ending up there after this life is over. But they don't stop at what they wants to believe. No, they move into the Scripture and search it for what God says about hell and about eternity.

What was really impressed upon me while reading Erasing Hell was how much this subject is dependent upon a proper understanding of God. The authors do a great job of showcasing God's character and nature throughout this scary and unpopular topic. While the first several chapters truly focus on the Scripture surrounding the topic of hell, the last two chapters had the most impact upon me. These chapters focused on some difficult questions concerning God and how we interpret God with our limited human minds. These chapters forced me to be honest with myself about how I think I have a right to determine what is right, and just, and loving.

Erasing Hell really does dwell on some tough subjects, but as the authors say and is listed in the description above, "We cannot afford to be wrong on this issue." I highly recommend this book to anyone who is undecided on this topic, to anyone who needs a look at the deeper nature and character of God, to anyone who needs a good dose of the fear of the LORD. To well...anyone.

Please note that of the other books by Francis Chan that I've read, Erasing Hell seems to be the most academic in nature. The authors obviously put a lot of research into this topic, but truthfully, you need to be willing to do some research on your own, specifically from the Bible, to form your own beliefs from God's Word.

Erasing Hell gets a good 4.5 stars from me. Have you read Erasing Hell? If so, what did you think? Let me know!