From the Ashes: Blood Promise

You can see my From the Ashes reviews of Vampire Academy here, Frostbite here, and Shadow Kiss here. 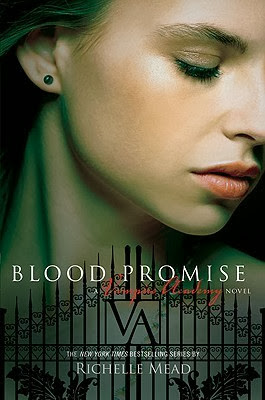 Source: Own in multiple formats

Goodreads description--Rose Hathaway's life will never be the same.

The recent attack on St. Vladimir's Academy devastated the entire Moroi world. Many are dead. And, for the few victims carried off by Strigoi, their fates are even worse. A rare tattoo now adorns Rose's neck, a mark that says she's killed far too many Strigoi to count. But only one victim matters . . . Dimitri Belikov. Rose must now choose one of two very different paths: honoring her life's vow to protect Lissa—her best friend and the last surviving Dragomir princess—or, dropping out of the Academy to strike out on her own and hunt down the man she loves. She'll have to go to the ends of the earth to find Dimitri and keep the promise he begged her to make. But the question is, when the time comes, will he want to be saved?

Now, with everything at stake—and worlds away from St. Vladimir's and her unguarded, vulnerable, and newly rebellious best friend—can Rose find the strength to destroy Dimitri? Or, will she sacrifice herself for a chance at eternal love?

I typically feel like what I'm about to do is pointless, but the epicness of the cliffhangers between Shadow Kiss, Blood Promise, and Spirit Bound are so huge, I refuse to ruin this series for anyone without ultra-fair warning. I mean it should be understood that if you haven't read book 3 in a series that there are probably spoilers for that book in a review of book 4, but as I said, I'm making it ultra-clear here. THERE WILL BE SPOILERS FOR SHADOW KISS IN THIS REVIEW!!!!!!!! If you have not read Shadow Kiss (book 3) or any of the books in this series, PLEASE!!!!! Do not read this review!

Blood Promise was the first of the Vampire Academy books that I had to wait on for publication. Vampire Academy, Frostbite, and Shadow Kiss were already published when I started reading the series. If you've read the series then you know how torturous it must have been to have to wait between Shadow Kiss and Blood Promise to see what happens next. Shadow Kiss leaves off at this epic cliffhanger/twist that demands getting your hands on the next book as stinking soon as possible. And that's what I did. Blood Promise was bought and started on release day. I don't remember how long it actually took me to read it. Not long, I know. And I remember that I finished Blood Promise at work the first time because the last three to five pages were huge and I ran back to a co-worker's desk and said "I know you haven't read this series, but I have to tell you what just happened," because I just couldn't hold it in, and I didn't want to ruin it for my friends who I knew would eventually read it. Which as it turns out, when I acquired the audiobook versions of this series, I forced that same coworker to listen to them. Thankfully she didn't really remember what I told her, so it all worked out.

Enough background, let's jump into it the book itself. At the end of Shadow Kiss, we find out that Dimitri has been turned into a Strigoi against his will. And Rose has borrowed money from Adrian (which I don't think she ever repays) to hunt Dimitri down and kill him in order to free him from his evil state as the old Dimitri would have wanted per a discussion that Rose and Dimitri had back in Vampire Academy. This was a really difficult decision for Rose because it meant leaving Lissa behind, which she's never done since they've been bonded. Blood Promise picks up with Rose being in Russia on the hunt for Dimitri.

Rose's mission breaks my heart. I can't imagine suffering from the pain and grief of losing the one that you love, but also having to hunt them down and kill them. Even knowing that you're doing them a favor. It's an extremely emotional mission. And Richelle Mead does a great job weaving in Rose's emotions which range from hurt and grief, to anxiety and trepidation, to anger and determination. And the emotional parts don't stop at her mission alone. Rose also meets Dimitri's family in Blood Promise. And when she does, she realizes that no one has bothered to let them know what's happened to Dimitri. She's faced with being the only one who cares enough to share the truth with them. How hard it would be to tell your love's family that he's gone! And not just dead, but now evil.

We're introduced to a new character in Blood Promise. One that Richelle Mead ended up loving as the rest of us have as well. Sydney Sage and the Alchemists. Sydney is extremely smart and methodical. She's been raised to believe that vampires, Moroi and Strigoi, and even dhampirs, half-Moroi, are all evil and unnatural. Her unease plays into her relationship with Rose, even though the two do grow closer through their small journey together. Sydney isn't scared of jumping into the mix hitting that Strigoi in the back in the fight scene in the alley when she and Rose first meet. I never really paid much attention to that part before, but I was impressed by it in this reading. Richelle Mead does a really good job of establishing how much of a nerd Sydney is in a very short amount of time. Sydney is present in Blood Promise but not overly so. I love how Sydney does her part to take care of Rose in Blood Promise and as we come to see in the Bloodlines series, she takes care of everyone else. I was really impressed with Richelle Mead's ability to take someone who might not have even been intended as a main character and to keep her true to herself throughout the Vampire Academy series and the Bloodlines series. I do want to note how funny it is about Adrian and Rose having a Spirit dream with Sydney sleeping in the same room as Rose (on the train from St. Petersburg).

Another secondary character who continues through the remaining books in the series is Abe Mazur. Abe literally cracks me up. He's part of the comedic relief in this series, and in Blood Promise in particular, he makes up for the lack of comedy that we would normally get from Rose's interactions with Christian or Adrian. My first impression of Abe based off the description we get in Blood Promise is PIMP! He's an outlandish dresser and a mobster to boot. I won't say much more about him other than he's one of my favorite characters in the entire series, and that I hope the movies make it far enough that we get to see him come to life on the big screen.

We're introduced to so many other secondary characters in Blood Promise, but it didn't feel like character overload while reading, but when it comes to breaking it down in a review, it kind of does. There's Dimitri's family: Elena, his mother; his *THREE sisters, Karolina, Sonya, and Victoria; his grandmother, Yeva. There are the other dhampirs of the town: Nikolai, his brother and their band of merry men. There's the Strigoi: Dimitri, Nathan (which we met in Shadow Kiss), Galina, and that dude Rose tortured to send a message to Dimitri. There's Avery; her father, the new headmaster of St. Vladamir's; Reid, Avery's brother; and Avery's guardian. And we see a smidgen more of Jill who we also met in Shadow Kiss and who plays a role in the later books and especially in the Bloodlines series.

As always with Vampire Academy, Rose's ability to get into Lissa's head provides a way for dual narration without really being dual narration. Lissa seems like the weaker character like she was more from Vampire Academy and less like the stronger person she was becoming in Frostbite and Shadow Kiss. She's influenced by Avery and the loss of Rose. She makes some dumb mistakes that cause problems with her and Christian. But I love that when push comes to shove, Rose and Lissa can push aside whatever drama they've had and know the each has the other's back. They can trust that each other has their best interests at heart, and they are BOTH willing to work at their friendship to make it better and stronger. Not many relationships out there are so lucky.

Now let's talk Dimitri--because this review is getting way too long. The first time I read Blood Promise I was holding out hope that Dimitri the Strigoi wouldn't be as bad as Rose and the others were making it out like he would be. As far as the reader knows, we've never met a Strigoi that was turned by force on a personal level. Would any of who Dimitri was before remain? I'm not going to answer that question. But those were my thoughts going into my first reading. But the new Dimitri explores the ins and outs of love versus desire. The majority of what I want to talk about concerning Blood Promise revolves around Dimitri, and the last 30% of this book, but I feel like any of that would be spoilerish and I just do not want to ruin this series for anyone. So I guess that's all I'm going to say about this. Can I just add, "Rosa..." *sigh*

As I've said in every review of this series so far, Richelle Mead does a great job with the foreshadowing. And we get more of that here. Some of the things that were foreshadowed in earlier books come about in Blood Promise, and Blood Promise has more foreshadowing for things to come. It's brilliant, I tell you. Honestly guys, I have so much more to say. I have notes upon notes on this book.

Blood Promise is probably my least favorite book in the series--one of them has to be. Yet, it's still a worthy installment and so much is packed into it. As with Frostbite, Blood Promise is more of a catalyst than anything else. A lot happens that moves the story along and things are necessary for character growth, but Blood Promise really just sets everything up for the next book, Spirit Bound. Do beware, the last three to five pages of Blood Promise are bound to leave you wanting more. I'd advise having the next book ready to go immediately.

Blood Promise gets 4 stars from me. Have you read Blood Promise? What did you think? Let me know!

*Richelle Mead made a little mistake. In Vampire Academy, she says that Dimitri has two sisters. In Blood Promise, we see he does in fact have three.