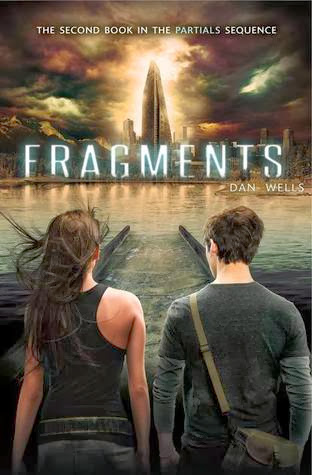 *Note: The above links to Amazon, Book Depsitory, and Booksamillion.com are affiliate links. Affiliate links support giveaways for Somewhere Only We Know readers.

Goodreads description--Kira Walker has found the cure for RM, but the battle for the survival of humans and Partials is only just beginning. Kira has left East Meadow in a desperate search for clues as to who she is. That the Partials themselves hold the cure for RM in their blood cannot be a coincidence—it must be part of a larger plan, a plan that Kira knows she is a part of, a plan that could save both races. Her allies are Afa Demoux, an unhinged drifter and former employee of ParaGen, and Samm and Heron, the Partials who betrayed her and saved her life, the only ones who know her secret. But can she trust them?

Meanwhile, back on Long Island, what’s left of humanity is gearing up for war with the Partials, and Marcus knows his only hope is to delay them until Kira returns. But Kira’s journey will take her deep into the overgrown wasteland of postapocalyptic America, and they will both discover that their greatest enemy may be one they didn’t even know existed.

I feel like I've accomplished something after finishing Fragments. Fragments isn't the longest book I've ever read and it's not even the longest book that I'll read this year, but it was lengthy. It also felt a little slow to me. Don't get me wrong, the length and the pacing don't really affect the quality of this book--it's still pretty fantastic--but it did affect my overall experience with the book.

Fragments is actually told from multiple POVs. It's been over a year since I've read Partials, but I don't remember it being told from multiple POVs--I could totally be wrong about that. Kira and Marcus are the two main narrators of Fragments but we also have a couple of short narrations from Samm and even including sections from Ariel and Haru. Sometimes I find myself frustrated with multiple POVs where the narrators are in completely different parts of the world and experiencing vastly different circumstances, but Marcus's sections were usually fairly short so I knew we would be coming back to Kira soon which helped me to not feel so abandoned and bounced around.

Marcus's sections were essential to carrying on the story, furthering the plot, and uncovering information that Kira couldn't possibly have uncovered under the same circumstances. Marcus comes into his own in Fragments and really steps up into a necessary role. He fights, he does his medic things, he even serves as diplomat and mediator--all while being extremely afraid, but determined to push through his fear. As with Partials, Marcus brings the comedy with his one-liners here and there. I love the addition that he brings to this story.

I can't discuss Marcus without discussing his relationship with Kira. They haven't seen each other since the end of Partials, but they try to maintain communication via radio whenever possible. In my review of Partials, I discussed how I wasn't attached to Marcus and Kira's relationship. They're boyfriend/girlfriend, but there seems to be a missing spark. I always had thoughts about how this would play out and how Kira really feels, but I've really enjoyed seeing my predictions worked into Fragments. But don't be fooled, the romance plays second fiddle to the main plot about saving their broken world.

Fragments is packed full of information that Kira uncovers about this wonderful world that Dan Wells has created. She learns who the Trust is (at least most of the members). She learns what their plan was for the partials, for RM, for the partial expiration date. She learns about herself and the world beyond New York. The information trickles in over the course of the book but the last 20% or so really produces the most information and ties everything we've learned together proving that Dan Wells is indeed brilliant.

The secondary characters shine and I loved the addition of Afa. I had trouble understanding his character in the beginning, but as time went by, I almost felt like I was just as protective of him as Kira becomes. Dan Wells handles him in a way that I don't even know how to describe. That one part where Mr. Wells just puts it out there point-blank well...that part hurt. I can't go into detail...spoilers you know. Heron was just as annoying in Fragments as in Partials. At times I wanted to like her and she wasn't one of those characters that I cringed reading about, but she definitely brought frustration with her. So many other characters that we meet--some completely new, some we've heard about but never met.

Samm is one of my favorite characters in the cast. He's so different from what you typically expect from a leading male because he just doesn't have any clue how to express himself. He's a Partial. He's not human. While we learn just how deeply Partials can experience human emotion--Kira being a prime example--it was interesting to watch how he struggles with showing his emotions. His trust in Kira is unflinching and unwavering to the point of following her across a wasteland on a mission that doesn't have any guarantee of the answers they're looking for. Samm gives us a look into the Partials that we don't get anywhere else. While Kira and Heron are both Partials, they're both different models from Samm and the majority of the Partials still alive.

I loved the decisions that Dan Wells made throughout this book. Kira doesn't follow the pattern of the self-sacrificing leading ladies that so much of YA literature does while still being self-sacrificing. She makes some really hard--impossible really--decisions along the way. These decisions even result in the deaths of others. And while it hurts her to make them, she knows that she's going to make a difference, redeem herself, and make those deaths mean something by completing her mission. Mr. Wells throws some impossible situations, complex questions, and ethical impossibilities in the mix of this broken and struggling world.

Fragments, though a slow read for me, still packs a powerful punch. The characters and the plot make up for any negatives that the pacing causes. Fragments gets 4 stars from me, and I can't wait to get started reading Ruins whenever it releases. Have you read Fragments? What did you think? Let me know!