The Unbecoming of Mara Dyer - Review 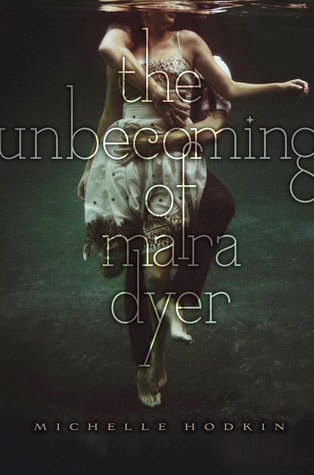 Goodreads description--Mara Dyer doesn’t think life can get any stranger than waking up in a hospital with no memory of how she got there.
It can.

She believes there must be more to the accident she can’t remember that killed her friends and left her mysteriously unharmed.
There is.

She doesn’t believe that after everything she’s been through, she can fall in love.
She’s wrong.

The Unbecoming of Mara Dyer begins with a letter from Mara explaining that she is not Mara Dyer. This letter brings in the mystery immediately, filling the reader's head with a dozen questions before the story even begins. As the description above states, Mara wakes up in a hospital after being in a coma for several days following an accident that killed her friends and left her unharmed. Mara can't remember the accident at all, and you know that this book is going to revolve around Mara finding out what happened, and it does. But it's also much more.

Mara suffers from PTSD as a result of this tragic event that she can't even remember, and she struggles to maintain her sanity as she deals with the stress, grief, and pain surrounding the accident and the death of her friends along with the pressures of moving on. In an effort to avoid spending time in a facility, Mara suggests that her family move and "start over." It was hard watching Mara struggle with what she's been through and the best friend that she lost, but Michelle Hodkin did a great job of keeping me guessing about Mara herself. Is this girl a serial killer, a sociopath/crazy person, or just severely lucky in an unlucky situation?

Mara's family is prominent throughout the story, though her dad is less so than the other characters. I was happy to see an intact fictional family with both parents and siblings. Mara's older brother Daniel is an especially likable character who's constantly both on the lookout for Mara for any signs of crazy, but also has Mara's back and plays defense against their parents to allow Mara the slack she needs to breathe. He's an excellent big brother. Joseph, Mara's younger brother, is a quirky cute kid, but being several years younger than Mara doesn't play as big of a role as Daniel. Mara makes one friend at school, Jamie who has her back but also has some issues from his past that color the way he sees things. And of course we can't have a YA story without having a high school mean girl/bully, Anna and her lackey Aiden--who is actually a dude.

And then there's Noah. Ah Noah. He has a reputation for being a bad boy and a heart breaker, using girls for what he wants and then discarding them like they're last year's trash. But we don't really see this in his behavior because Mara never sees that side of him. There is so much more to Noah than the average person sees, and of course Mara gets to discover it all--or well most of it. Noah was an extra piece of mystery that I didn't even know was mysterious until more than halfway through the book.

I enjoyed Michelle Hodkin's writing style, though not as poetic as Maggie Stiefvater, Lauren Oliver, or Courtney Summers, there was a quality to the prose that added depth, and I loved it. My favorite quotes:

pg 171 - "A current traveled from my fingertips through the hollow where my stomach used to be. And just like that, I was completely, utterly, and entirely,

pg 243 - "I thought of little blond, adorable Sophie, and felt the sudden urge to kick her in the shins and run away."

pg 265 - "'Would it be greedy of me to ask for one of you?' 'A self-portrait?' I asked. Noah smiled an answer. 'I haven't done one in forever,' I said. 'So it's about time then?' I contemplated the idea. I'd have to draw myself without a mirror, now that I saw dead people in them these days."

pg 368 - "'What'...'were you doing with five thousand dollars on you?' 'Eight actually. I had grand plans for today. Hookers and blow aren't cheap, but I suppose animal sacrifice will have to do. Happy birthday.'"

pg 376 - "I twisted my arm to curl him behind me and he unfolded there, the two of us snuggled like quotations marks in his room full of words."

I could keep going, but I don't want to give away too much.

The Unbecoming of Mara Dyer was mysterious and I really enjoyed flushing out the answers as I continued to turn pages. I didn't love the ending. I mean the last two-three pages were okay, but the little section before that had me wanting to punch Mara in the face. I was on the verge of thinking the ending ruined the entire book for me, but I won't go that far. This is the way the world of "books in a series" goes. There must be conflict in need of solving for the continuation of the series to be necessary. And thus enter conflict--again not the last two pages, that's different conflict and totally acceptable.